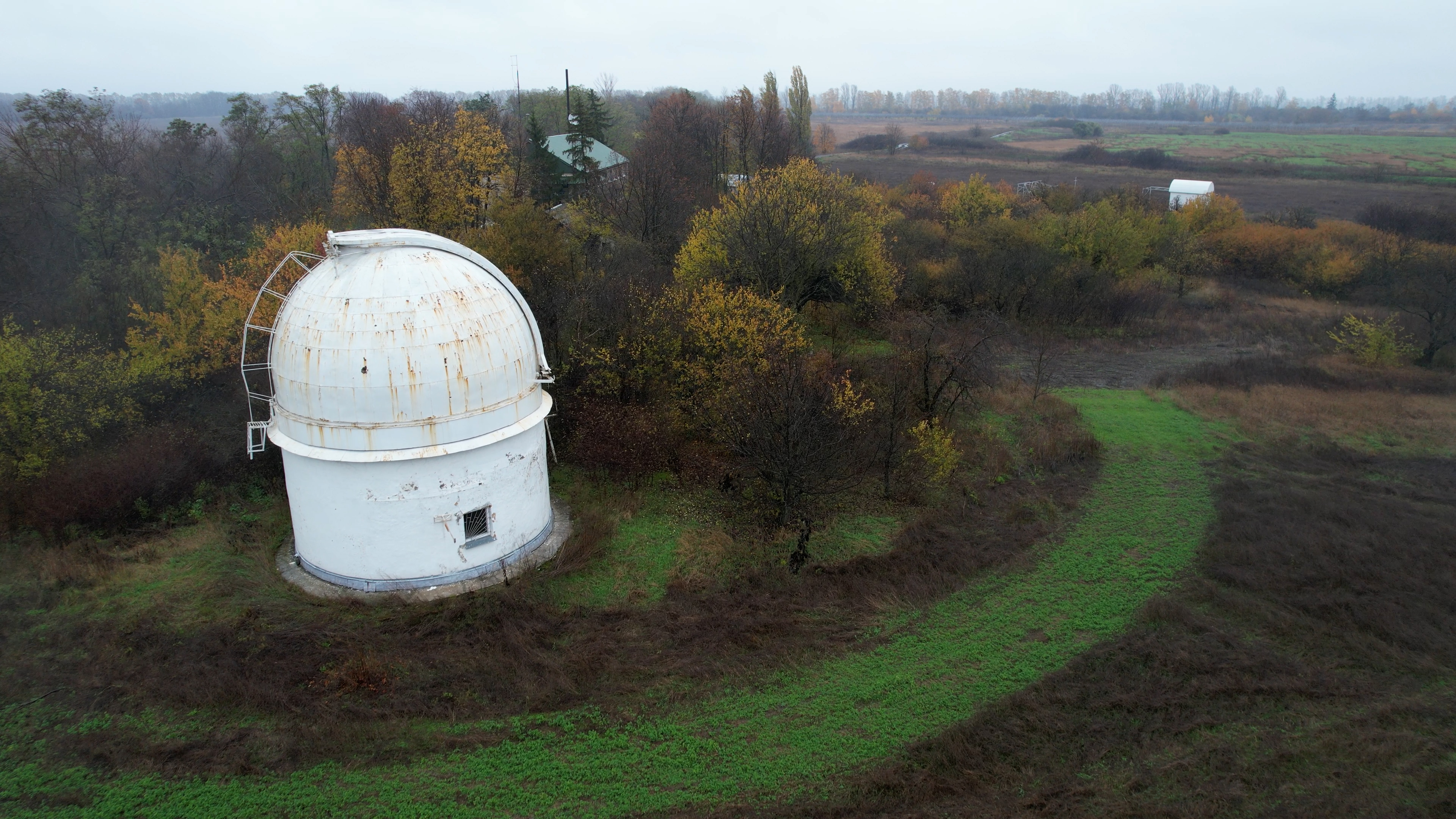 In peacetime, the Kharkiv National University astronomy students used to have their summer internship at the Chuhiiv Observation Station. One of them is Maria Stepanyuk – a Kharkiv poet and astronomer who accompanied Gwara Media in our expedition to the observatory.

Through Maria’s eyes, we show what the observatory turned into after the Russian army “visited” it during the occupation.

The scientists and observatory workers travel there by “gazelle” (a slang name for a series of light commercial vehicles: pickup trucks, vans, and minibusses), and we follow. On the way, we pass the Radio Astronomy Observatory of the Institute of Radio Astronomy of the National Academy of Sciences of Ukraine. The nearly two-kilometer-long cosmic wave capture array seems undamaged on the surface. However, we do not know the fate of all the machines that have served the antennas for support, data acquisition, processing, storage, and analysis.

It is dangerous to visit the territory of the observatory without a guide. The place has been de-occupied for a month and a half, but the employees were only allowed to come there two days ago. Today, only roads and interior spaces have been de-mined. The fields and forests around, as well as throughout Kharkiv Oblast, remain insecure.

We park between a small one-story house and a two-story residential building. Our guide is Ivan Slyusarev, a senior lecturer at the Department of Astronomy and Space Informatics, and a researcher at the Institute of Astronomy, to which the optical observatory belongs.

Junk is scattered all over the place, our eye catches an abandoned motorcycle helmet. On the other side of the building, we see a gas stove – the reason for its presence here remains a mystery.

We enter the building almost immediately. First of all, we need to look around. There are about 15 rooms on two floors: a dining room, a shower room, a classroom, and a library.

During the occupation, Russians had settled and lived in the building. Everything is in a mess, some rooms are almost empty – just dust, in some places one bed, in others one closet.

But some rooms have been turned into warehouses: one for electrical appliances, one with furniture.

For a person who spent a month of the summer internship here it looks surreal. It is hard to imagine what exactly happened in this area. Apparently, there were rooms for single people: on the windowsills we see the books taken from the library and some improvised ashtrays.

On some of the doors, we see the lists with the number of beds inside. On some are the crossed-out nicknames of soldiers who were based here.

Ivan invites us to go downstairs, to the basement, to see the coherent-optical image processor. The occupiers have made an uncomfortable bed right on it. The place may have been used as a bunker, as the room extends along the entire building. The walls are leaking. There is also a workshop in the basement, but the occupiers have taken from there everything they could. However, for unknown reasons, a Singer sewing machine remains in the room.

The rain has eased off a little, so it’s time to see the telescope.

It is located behind our parking lot, near the house. Later we will return there as it is the place where the Russians set up a field kitchen.

All the equipment from the telescope has been removed. And as in the other building, all the new power lines have been pulled from the place.

But when Ivan checks the mirror of the telescope tube, it turns out to be intact! This is huge, as the telescope is a part of history – the founder of this observatory was the famous Kharkiv astronomer Mykola Barabashov. Can the observatory be considered as having survived the occupation? I think so. The tower and the mirror are intact, as well as the buildings. One day the place can become a museum.

The local astronomers have been dreaming of a new telescope for more than five years, but the fulfillment of that dream required too many factors. I hope it will become possible after the victory.

Finally, we pass by the motorcycle cemetery to look at the walls that remained of Oleksandr Golubayev`s Meteor Network, which had been moved to the village of Grakove from the outskirts of Odesa. The Network served for our contribution to the international astronomers movement, the accumulation of data about the sky from different corners of our planet so that scientists do not miss future meteor showers.

Nearby, Russian soldiers set up the only dugout on the territory made of boxes and cabinets.

We investigated all the allowed paths, only the house, next to which we parked, remained unexplored. It looks the most damaged: targets are drawn on one of the walls, and the variety of types of destruction shows that the “new residents” have been shooting it with everything they had. They had even poked holes in the building.

This wall is almost entirely ruined.

The house you see was built at the same time as the telescope, in 1962. Leonid Akimov, a Ukrainian astronomer and specialist in Moon physics, worked and lived there all his life until he died in 2017. Luckily, his wife has moved to Kharkiv. Everything is scattered inside the house, food mixed up with books and clothes.

No documents of Russian soldiers have been found on the territory so far. We hope it’s just a matter of time, and we look forward to the investigation.