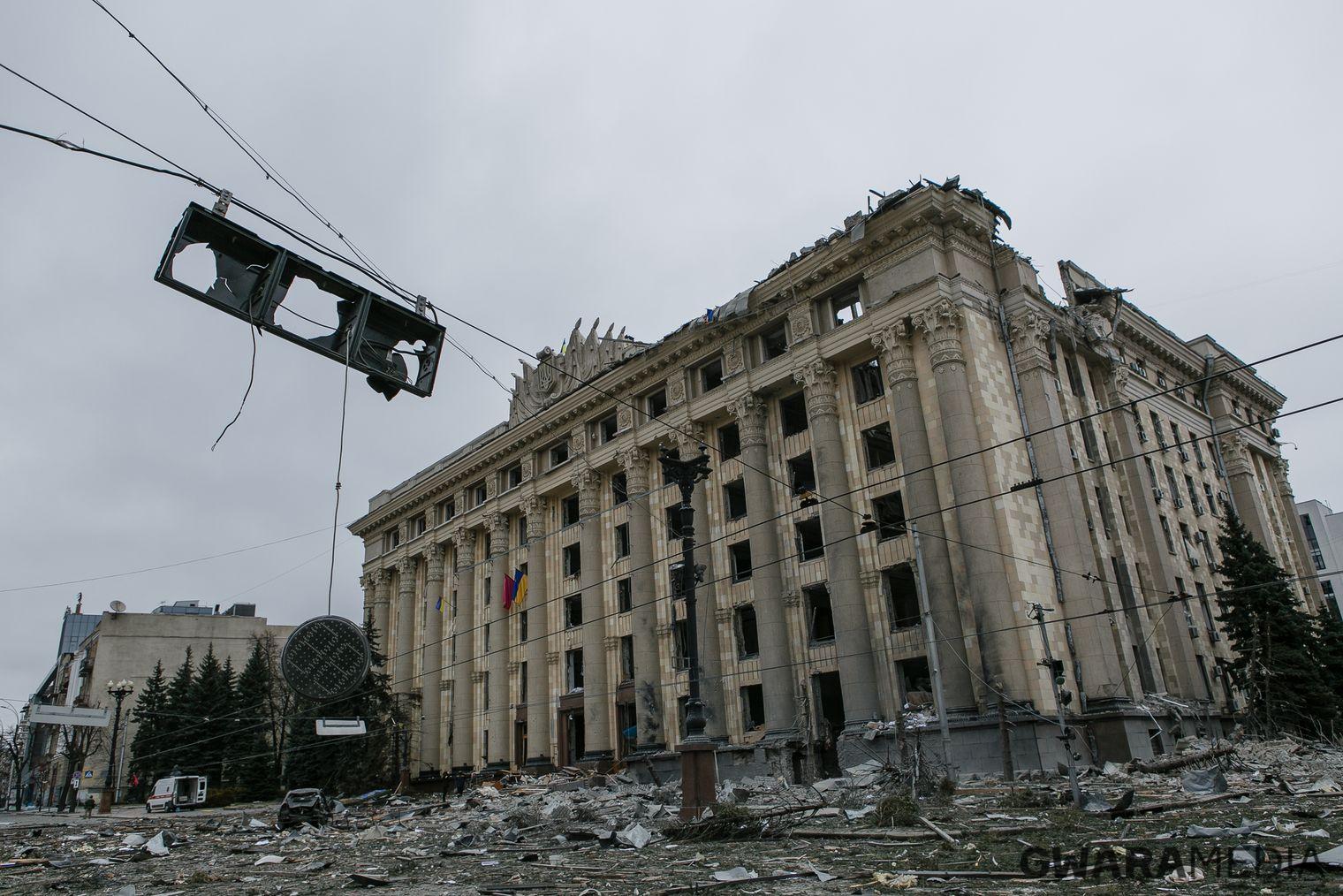 Being one of the largest squares in Europe, Maidan Svobody (Freedom Square, Kharkiv) was targeted and heavily damaged by Russians during the very first days of the all-out war. What kind of symbolic meaning hinds behind the hit that shaped dozens of years of Kharkiv history?

The powerful airstrike of two Russian missiles hit the biggest square of Ukraine – The Maidan Svobody (Freedom Square, ukr) in Kharkiv early in the morning on March 1, 2022, which was the sixth day of the full-scale Russian invasion of Ukraine. The moment of blast and the destruction it caused were broadcast all over the world by major TV channels. The missiles stroke one of the prominent buildings on the square – the Regional State Administration (ODA, ukr), having also ruined surrounding houses; 29 people were killed and many were wounded then. In June 2022, the ODA building was stated infeasible to be reconstructed.

However, in addition to physical destruction the blast implied a symbolical meaning. “That was a blow into my very heart. Because the square is the heart of my city, of my life, so it hurts me,” a local dweller says, definitely expressing the feelings and emotions of many.

Those who have left the city after the Russian-Ukrainian all-out war started and those who have stayed (or have returned) to live on under daily brutal shelling are convinced that the blowup on the central square was aimed to intimidate the civil people who resisted Russian aggression. Which nevertheless provoked the quite opposite result: even many of those who had previously thought of Russia as of a friendly state started to hate not only its aggressive policies and violent actions but the very Russian way of life including its language and ballet; the Kharkivites became much eager to stand for Ukraine since the bloody Russian intentions revealed.

After being constructed in 1920s the central Kharkiv square changed several names. Previously it was Veterinarnaya square, later in 1925 it was named after KGB leader Dzerzhinsky. During the two German occupation periods at World War II it was named after the German Army and after the 1st SS Division Leibstandart, which occupied the city, to get back the name of Dzerzhinsky in 1943. After the Independence of Ukraine was proclaimed the square was given the name of Freedom in 1991, which is its actual name these days. According to its dimensions the Maidan Svobody was constructed in the form of a chemical flask. Its rectangular part leads to Sumska Street, and the round part leads to Prospect of Science. The circle diameter consists 350 meters.

Being the integral nerve of the city the central square stirred some urban myths. With a total area of 119 thousand square meters in Soviet times it was considered by some local media to be the first one in Europe by its size, when in fact it has been only the eighth. In the total world rating of squares it occupies a place somewhere in the third dozen.

Also for many years a myth about another famous building on the square, Derzhprom, or Building of State Industry, was circulated. It was believed that if you look at the roof of Derzhprom from up above, you can see a sheet of music with the first notes of the International anthem. In fact, there was not such a feature in the Derzhprom design, which surely does not make the building less valuable. Derzhprom was the first Soviet 13-story skyscraper, an architectural monument in the constructivist style, built in 1925-1928.  Many writers invented metaphorical names for it, such as “house-mountain”, “ark” or “human anthill”. In 2017, Derzhprom was included in the Preliminary UNESCO World Heritage List.

In addition to Derzhprom and the Regional State Administration building, there are other outstanding architectural monuments on the Maidan Svobody, such as Kharkiv National University named after Karazin, its northern building and the former military academy, Kharkiv Hotel, a veterinary institute, and the new Palace of Children’s Creativity.

There are also numerous monuments in different places of the square worthy of mentioning like a monument to Vasyl Karazin, to volunteers of the student battalion and to three Nobel laureates: Lev Landau, Ilya Mechnikov and Simon Kuznets. But one of the most controversial was the monument to Volodymyr Lenin installed in 1963 and pulled down on September 28, 2014. The monument impressed a viewer with its greatness being of over 20 meters high with the bronze figure of the Communist idol of over 8 meters. That figure had a myth of its own. In the winter 2014 when all over Ukraine many monuments to Lenin and other Soviet leaders were being torn down, the rumors were spread that it was dangerous to demolish Kharkiv’s Lenin as this was a monolithic statue made of bronze and it could damage underground tunnels when falling down as it was supposed to be too heavy. How immensely were Kharkiv activists and witnesses surprised to find out that in reality the figure was… hollow inside and easy to be broken. When they pulled the statue with some ropes it fell down like a clay cup and broke into pieces.

Symbolically, the whole era of Soviet myths and fakes shattered into debris with it, and this historical breakthrough was celebrated joyfully by the excited crowd on Maidan Svobody the whole night.

However, the triumph was immature. Then Kharkiv city authorities did not give up the Soviet habits that easily. First they intended to restore the Lenin statue, but after ardent resistance of Kharkiv activists it was announced that another monument was going to be installed on the empty place. Not only a lavish part of the city budget was to be spent on it but the design itself looked vulgar and ugly which immediately was mocked and scorned by civic activists, young architecture professionals and numerous city dwellers. Such a powerful and consentaneous grass-root resistance lead to fostering alternative designs and concepts and resulted in the modernized reconstruction of the part of the square with the installation of fountains and flower beds instead of persistent Soviet symbols.

Crave for Freedom on the Square

As every city’s central square Maidan Svobody has always been the location for the city’s major events both cultural and political, as well as the place for personal celebrations like weddings, anniversaries or graduation balls. Concerts, fairs, exhibitions and festive demonstrations were regularly held there. Thus in 2008 the square hosted the largest number of spectators in its history for the concert of the cult group Queen with Paul Rodgers. Almost 350 thousand people enjoyed the tremendous event then. In 2012 the square became the main placing for fan zones as Kharkiv welcomed Euro 2012.

Since 2014, after Russia annexed Crimea and occupied part of Donbas, the exhibitions of military equipment, volunteer actions and Ukrainian patriotic marches were held there regularly. One of the most vibrant places on the square was a volunteer tent “All for the Victory”, which was installed in front of the Regional State Administration. The tent became a place of informational and financial support for Ukrainian Army and people who were victims of the war, the volunteers held there master classes — like those on military scrim weaving. Symbolically, the tent was not damaged by the blowup which ruined ODA building on March 1, and it continues acting as a volunteer center, fundraising place for Ukrainian warriors and humanitarian mission.

Similarly, Freedom Square continues acting as a center for Kharkiv dwellers crave for freedom. “This is a place where the people of Kharkiv once impressed me so much,” says Kharkovite Svitlana Ryzhykova, “When in November 2004 they came here in an unprecedented number — from 80 to 120 thousand people according to some estimates — to say their decisive “no” to shameless falsification of Presidential elections. And this was the beginning of our long and extremely difficult path to democracy and freedom from colonial dependence on Russia”. 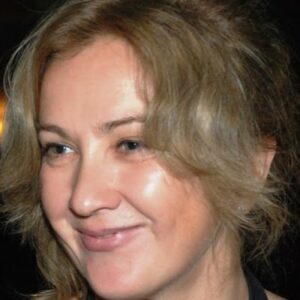