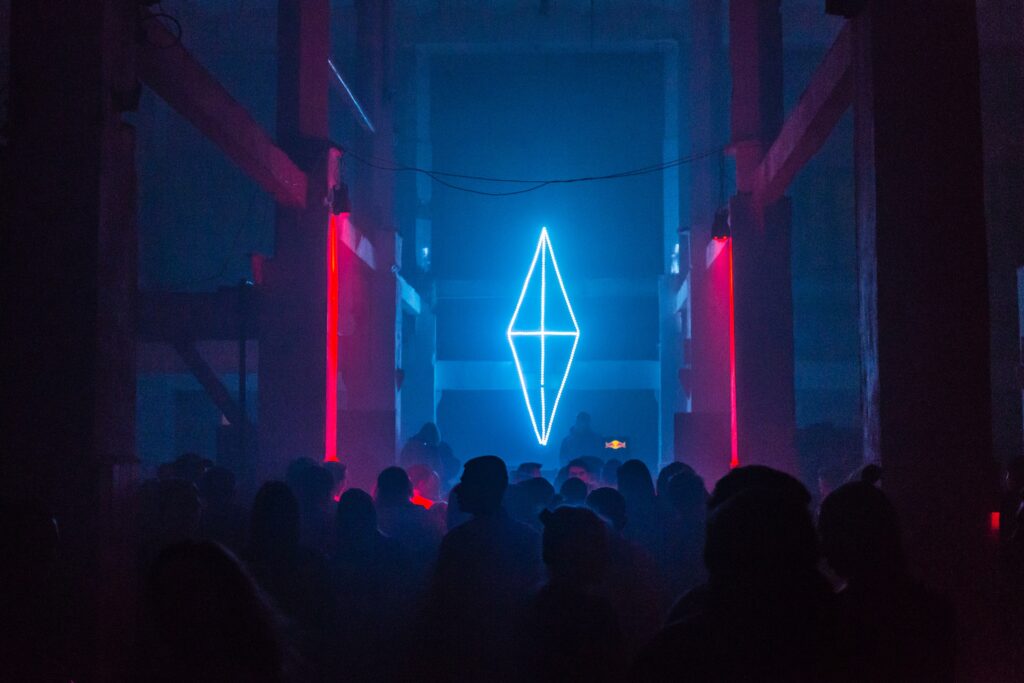 “I am Happy to Perform Against The Audience Which Always Gives Us a Great Feedback”: Conversation with Olena Dzhurina

Long ago Olena Dzhurina came to Kharkiv to get a law degree, but she has fallen for this city as much that she couldn’t leave anymore. Then she started to look for her calling in life and suddenly discovered the world of VJing, which turned out to be her main occupation henceforth. Now Olena introduces herself as a media artist, performer, organizer, and co-organizer of numerous art events. How to become a specialist in the field you won’t ever be taught in the university?
We have talked through the opportunities, experiments, motivation, the right on the city, a connection between people, and the role of a performer in the modern world.

Seven years ago I reached out to Kharkiv to finish my higher education, I have learned for a year and finally decided to stay because I’ve really fallen in love with this city. After completing my education I started to look for my life’s purpose and then observed how the VJs work during art events. At that time I was surprised by the combination of sound and depiction. So that I decided to learn more about the process of creating videos, effects, and animation. I’ve immersed myself in this universe and totally absorbed in it. That’s how it appeared to be my foremost pastime.

I was interested in the creative industry since childhood and evolved gradually in this direction. I like to research what the world consists of, especially the world of art. And the best way to experience it is to practice. So I tried different techniques, but the experiment is my favorite, once and for all. New media, materials, themes, and conceptions, all of the above are a search of an identity.

In the beginning, I visited diverse platforms, where concerts, electronic parties, and other cool things took place. There I offered my volunteer favors. I met lots of creative people, talked to them, and set friendly boundaries with some. Afterward they helped me to understand the process, gave clues as to development and opportunities, what tools should I use, etc. When I realized that I’ve reached a certain professional point, I started offering my services as a paid job. In this manner, VJing became my actual profession.

Astounding when you sit at the end of a hall and no one can see you, but everyone’s attention is turned to a big screen where your masterpiece is projected. I loved it. In my opinion, observing is one of the best inherent of the art industry. Onlooking the world, finding the links between objects. Initially, I was excited to watch the process from my “VJ niche(shelter)” and recognizing relations among the audience and the action on the stage. It reminds me of a dialog. Later I caught myself thinking that I want to actually stand on the stage, so the next amount of time I spent learning about the specifics of working with sound and mixing it with a picture. Managing all of that by myself.

Further, it turned out as more synthetic art, where I started to mix music operation, sound design, and my own pictures. As such, I move to a more performative shape. Hence, it’s truly important for the artist to feel the connection with people, who joined, and with whom you share a common vibe. It seems impossible to find the right words to describe this sensation.

During such events, I am always glad to meet my old friends, who are exceptionally proficient in this. I can count on their professional and true criticism and help with some unclear moments after the performance. At the same time, it is good to see new faces too. Also, it is fascinating to watch a person who is new in this world of performance: primarily it shakes her conscience but then her whole perspective changes and expands, and I’m able to help her with it, discuss something. Because communication in this sphere is principally important. And it can be diverse.

During the process of performance, you are capable of feeling this unusual feeling of being in the steam. I think everyone who found his beloved occupation can relate. And when it’s  over you glide out, feeling detached and allegedly asking yourself “where am I ?” That is why I like to watch records of the show. Because there I look completely different compared with my inner world and genuine feelings at that moment. Seemingly the same moment, but different “optics”.

I work depending on my mood. Frequently, starting a new project I already have a conception of what I want to put in there. Uttermost I like to work with the systems of real-time video and graphics processing. There is a special software for this, called TouchDesigner, for instance. This program enables you to work with 2D computer graphics, 3D objects, or your own video; managing them in real-time, adjusting to the moves of performers. During the last six months, I went in for creating Footages. I use my old iPhone for experiments with mobile shooting. I visit lots of places, looking for a contexture which I’d like to explore. Then I do my own collections of footage, which I compliment and mix with each other in the various programs. I am lucky to have friends from the same orbit as me, so we support each other, share ideas and tools, discuss our concerns. It is the best circs, isn’t it?

In the different cities of Ukraine cultural situation is corresponding. Unfortunately, culture is still at the end of the list when it comes to funding and I hope it will change for the better. What encourages me is the emergence of a national cultural foundation, national grant projects, and cooperation with international partners. It helps to bring our country to the world stage. However, it is important to remember that there always are opportunities: quite enough to make a difference. We need to change the angle of our view and move forward. If we consolidate our forces, we will meet our auspicious future. And it’s great.

I am inspired by an enormous amount of new unrevealed things which I can try. Probably you won’t reinvent the wheel, but when you leave your touch on something it won’t stay the same anymore. Your presence as an artist or just an “explorer” is intimidating. The desire to assess the world.

It’s important to see the goals on this path, milestones that you are reaching for. And passing by, you already know how tremendous is the way behind you. Yet I wouldn’t say  I have a global dream. I believe there’s beauty in every moment of life. So enjoy your every move. I am just happy to perform against the audience and getting feedback, no matter how many people there are. The key is your energy which can light up all the places you go and make magic.

Now during quarantine, I am inspired by people who want to share their knowledge, experience, point of view and what is even cooler they find the ways and opportunities to implement it. A lot of interesting things happened throughout that time since new forms of interaction appeared. The last but not the least project which provided me with lots of joy is online-residence a:pART (Berlin-Poltava). It was coordinated by Logos and Lernlabor – ukrainian and german organizations. 7 members from each country took part in it, so we have separated into tandem partnerships and dealt with some matters for a month. Then we were meeting online and it’s weird but we felt as we’re sitting right in front of each other but in reality, thousands of kilometers separated us, fascinating.

An impressive project occurred this summer in Zhytomyr – sound artists’ residence at JSC “Electrovymiriuvach”. It’s a factory with a big territory and lots of shops, situated in the center of the city. It still operates but is not as powerful as before. It produces electrical measuring equipment and also musical instruments such as synthesizers, electro accordions, keyboard instruments, and drum machines. The factory worked like this from the 60s till the 90s, and it was truly valuable in the Soviet Union. Now collectors and musicians are still looking for these treasures.

This musician’s residence happened during the renovation of the factory. We have got inside and listened to the building’s voices. There I did my own research about visual signs and in addition, studied soundscapes. All of the above I have placed in my performance which I presented ibid. But the best part happened on the presentation day: 15 participants represented their projects almost in sequence. People transferred from one musical scene to another, sounds were blending and leaking reciprocally. Lots of people came to see it, many natives in particular. They claimed, they have never been inside a factory before, although it is settled in the center of the city and positioned as a considerable object. Because it provides many inhabitants with working places. It was a little moment of honor when people for the first time got into the place which was inaccessible for them long enough.

I consider such projects as a breakthrough for Ukraine: they give a chance to implement something new in our cities. So this story is about affirmation, that each of us has the right to our city. Urban and cultural missions in a couple make the impact stronger tenfold. Thanks to such events people feel involved and responsible.

Sometimes I think that there are more “meaningful” practical jobs, which are obviously useful for society. I ask myself, what’s the use of performers, but then I see, there wouldn’t be any progress without some professions, some points of view, etc. Everything has its reason. You are the one who decides what role it will play. The thing is you should be frank about what you do.