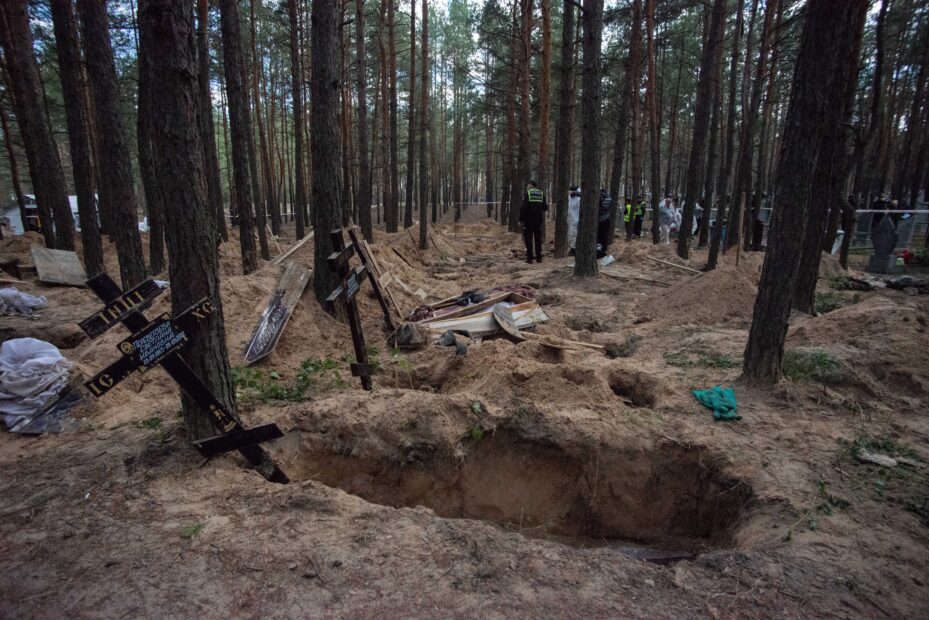 Before the invasion, about 50,000 people lived in Izium. Now there are five times fewer residents. Just several days after the liberation of the city, which had been occupied since April, Ukrainian investigators found a mass burial of locals, most of whom had died violently. Among about 450 bodies were also Volodymyr Kolesnyk`s relatives. Despite the information that the exhumation of the victims has been completed, Volodymyr still cannot bury his loved ones.

It was night. Izium was on fire. It was as bright as during the day. Fire and bombs were all people could see during two or three hours. Volodia and his parents were hiding in the house: the cellar was not sturdy, so there was no point in climbing down there. Volodia couldn`t let go of the icons. He had not been much of a religious person before, but that night he was praying non-stop.

Volodymyr is 39 years old; he is a marksman and works in the paramilitary guard service at Kharkiv Railway Station. When the war started, he was staying with his mother in Izium. He had been on vacation since Feb. 13. Only recently Volodymyr has managed to come to Kharkiv, where he works and lives. He survived occupation with his parents. When asked about other relatives, he says:

Volodia did not believe that there would be a war. But on March 3, the planes were flying over his house. That day Volodia saw his cousin for the last time when he offered the relative to wait out with his family.

“They decided to hide at home, in that terrible house where they died,” says Volodia. “Yura said, “we will be erased.” He seemed to sense that something terrible was going to happen.”

The Russian army entered from the side of Volodia’s parent’s house and started shooting at the city from there. A few days later, it was impossible to leave the residential area with private houses and get into the city.

Volodia listened to the explosions. He tried to stay calm and reassure his parents. After some time, he gathered his courage and decided to go to the city with a neighbor.

“It was horrible. Everything was destroyed. The middle part of my cousin’s house was ruined,” says Volodymyr. Later, it will be revealed that Izium has been destroyed by 80%.

Volodia’s cousin, Yuriy Yakovenko, with his wife Svitlana and aunt Natalia, his mother’s sister, lived in Izium at Pervomayska Street, 2, on the third floor, in apartment №20.

Volodia’s cousin was a driver for almost all his life. Recently, he worked on road repairs. He liked to go fishing. He bought a house in the suburbs to grow strawberries. He wanted to work for himself and lived in harmony with his wife, Svitlana.

The Yakovenko family probably liked gathering in the kitchen to drink tea and discuss their day, dreaming of a vacation at the sea and other simple things that the invaders made impossible.

On March 9, at 9 a.m., a Russian bomber hit the five-story building where the Yakovenko family lived.

“The bomb was so big that the house collapsed from the roof to the basement,” neighbors from the block told Volodia. Then the invaders attacked the building with tanks until it was razed to the ground.

At that moment, Volodia was reassuring himself that his relatives had already left. There was no contact with them. Volodia walked around the cousin’s neighborhood, trying to find at least something.

The former manager of the homeowners association was on guard duty near the remains of the five-story building.

– Do you know where Yura Yakovenko is? Volodia asked.

– Yura is lying in the basement, it has collapsed onto him, and his wife and your aunt are on the stairwell. One on the second floor, the other in front of the first floor, the house crushed on them.

– I know everyone who has been hiding here.

The bodies weren’t retrieved at once

Fifty-four people died in the building on Pervomayska Street. Witnesses heard muffled cries for help. In the chaos of war, there was no one to help. The building residents were dying under the bricks that once had been their homes. Volodymyr’s acquaintance lost eight relatives who died under the rubble.

They started retrieving the bodies only at the end of April after locals negotiated with the occupiers. The local State Emergency Service was in charge of looking for the dead. Collaborators and the funeral home helped with the burials. When sorting out the debris, the belongings and documents were taken from the victims. Russians said that they needed evidence for an investigative committee of the Russian Federation. They promised that they would return it later. But Volodia still cannot find his family’s belongings.

“Then they (Russians) said that the banderas (the word originated from the surname of Ukrainian politician, Stepan Bandera) hit. Bander aircraft, says Volodia. “But we knew it was theirs.”

In July, the Russian authorities published lists of dead residents of Izium, who, according to their definition, “are victims of the genocide by the Kyiv regime.” Among the surnames are relatives of Volodymyr Kolesnyk.

The occupiers buried people in the pine forest that spread out on the city’s southwestern outskirts. Numbers and short inscriptions were the only decoration on the carelessly made wooden crosses. There were more and more of those crosses with every passing week of the occupation.

Residents were not allowed to enter the new cemetery.

Life in a crooked reality

During the occupation, terror reigned in Izium, as in other cities where the “liberators” came.

When there was no light, and someone had a charged phone, the occupiers suspected that person immediately. People were interrogated, examined, and some were taken away for re-education.

Volodia recorded how school No. 4, which he attended, was burned down by a bomb. The Russians came up and saw videos and photos in the phone’s gallery. The Russian lieutenant asked Volodia why he was filming.

“And I say to him, “But what are you afraid of? Those are banderas.” They answer: “We will take you to the commandant’s office now and kill you there,” Volodia recalls. But they didn’t kill, just deleted the video and promised to take the phone the next time I film something.”

Izium had been under constant shelling for 5 months. Only the weapons changed. At one of the checkpoints, Volodymyr asked a Russian soldier who was shooting.

“He smiled and said: Ukrainians, they don’t like you anymore. And I replied: “Why aren’t you running away then? I’m, for one, scared.” The soldier replied: “Provocation is a big deal,” Volodia quotes.

In the first days of the occupation, the Russians distributed products taken from looters among the residents. Those who did not get it, especially older people, whom no one cared about, died of hunger. Later, local sellers from Kupiansk started bringing Russian goods. They cost three or four times as much as before. People withdrew money from Ukrainian cards at interest, sometimes it reached 25%.

“And why did you, I say, come to “liberate” us and feed us so badly? The soldier replied: “We came to kill you, not feed you. So it’s more than enough what you receive,” Volodymyr says.

They gave two cans of stew and two cans of canned fish for two weeks or a month. For one. And half a kilogram of rice or other cereal.

“You talked with them so bravely; weren’t you afraid that they might take you to the basement?” I can’t help but ask.

“I once worked near Moscow and built houses for them, so I know their mentality. I could be wrong, but I tried to choose less aggressive ones. Of course, some could immediately shoot you in the head,” says Volodia.

There were always prisoners in the police basements. People howled and cried. They were taken because the Russians might simply not like them; the neighbors might turn them in — tell the Russians that someone was in the Territorial defense forces or defame people. Someone’s hands were twisted; someone was flogged and let go; someone disappeared. There were at least six torture chambers in Izium.

“The third part of the city was collaborators. They and the Russians hugged, kissed, and had some deals together. Collaborators traded, and the military men sold gasoline to them at half price. There were many of them,” says Volodia.

The collaborators convinced others that the Russians were brothers to the Ukrainians. Volodymyr is furious:

“And when these brothers came, destroyed everything, killed people, caused evil, then what kind of brothers are they?”

Some of the collaborators fled before the counterattack of the Ukrainian Armed Forces. Those who did not make it have not yet been punished. Russian soldiers also hurriedly fled from Kharkiv Oblast, leaving evidence of war crimes.

Thanks to the documents found, Gwara Media managed to identify Russians operating in the city who may be involved in war crimes.

Whole families are buried in the pine forest

Volodia still does not believe that the city was liberated. Now he finally feels free. The man kept the Ukrainian flag during the occupation for six months.

When Ukrainian troops entered Izium on Sept. 10, Volodia met them with this very flag.

Immediately after the liberation of Izium, Volodymyr came to the Pishchansky cemetery to look for his relatives. He found numbered crosses: №199 ーYura, №164 ーSvitlana, №174 ーAunt Natalia.

Exhumation of bodies began in the forest on Sept. 16. Photos of the Izium tragedy traveled around the world. Foreign colleagues came to help Ukrainian experts and forensic scientists to help document the evidence of the Russian military. Children and soldiers of the Armed Forces of Ukraine have been found among the victims.

During the burial, the laboratory was working: Volodia had already submitted DNA samples to confirm that his relatives were among the dead. Later, he resubmitted samples again. But he has not yet received any information about the deceased relatives.

The bodies from the forest were sent for forensic examination. The media published instructions on how to collect a DNA sample on your own if a relative of the deceased is abroad.

Currently, about 200 bodies remain unidentified. Although during the occupation, the employees of the ritual service made records about the burial of people, they are inaccurate. Experts encounter errors even in gender identification, so the journals or witness statements are not reliable.

“I would like to bury them humanely. I see that this is a long-term process,” the man sighs.

Svitlana and Yura, killed by an aerial bomb, have children. They live in Poland. They call and ask about their parents. Uncle Volodia promised that he would take care of a decent funeral for their parents. The only question is when.

“The investigators said that it could last for a month or two. Two months have already passed. There is no news,” says Volodymyr.

Volodymyr’s mother is Natalia Yakovenko’s sister. She is a senior woman who does not leave the house. No one took DNA samples from Volodia’s mother.

“It turns out that I gave DNA samples instead of all three of us. Maybe something doesn’t match,” says the man. “People died in such an unfair way, and now it is unclear how long they will be kept there [at the place of examination — ed.].”

This is how the invasion of the Russian Federation takes away the chance for a decent life for the living and peace for the dead.

While the process of identifying the bodies is underway, neighbors and relatives of the victims who survived are creating a memorial around the ruins of the building. Photos and candles are their way of honoring the dead.