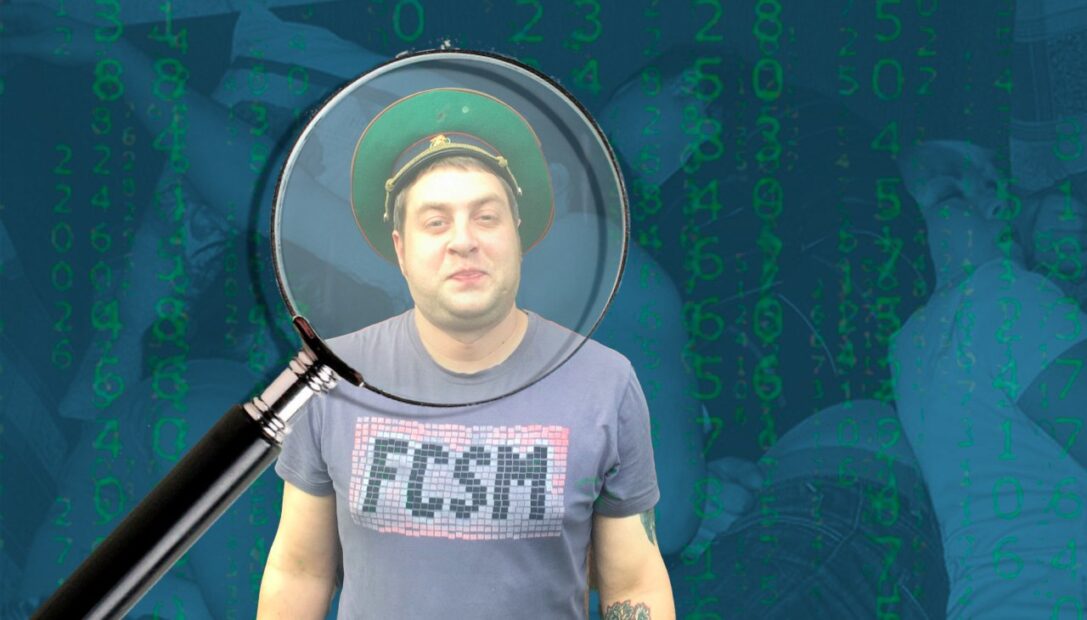 Retreating from Izium [a city in Kharkiv Oblast — ed.], recently liberated by Ukrainian Armed Forces, the Russian military left a large amount of evidence of the committed crimes. A valuable gift for Ukrainians was a carelessly left list of Russian military personnel. Thanks to it, Gwara Media fact-checkers identified nine Russian servicemen allegedly responsible for the atrocities.

On September 10, the Ukrainian flag finally flew over Izium after almost 6 months of Russian occupation. The Armed Forces of Ukraine drew the Russian troops away from the Kharkiv Oblast. Fleeing, the occupiers left behind not only military equipment but also evidence of multiple war crimes. Gwara Media journalists managed to get to the former headquarters of the Russian military on Olena Teliha Street in the recently liberated Izium.

There we found abandoned documents that led us to 9 servicemen of the Russian Federation.

We identified 6 servicemen with a help of the documents above.

In the first pile, we found a list of the personnel of the 856th Guards Self-propelled Artillery Regiment afterward variously awarded by the state of the Russian Federation.

Previously, the Main Directorate of Ukrainian Intelligencehad reported on this regiment having committed war crimes against Ukrainian civilians. However, our trip to Izium helped to find out more details about the location of this regiment. Moreover, we managed to identify six people from there.

So, let us start with sergeant Mykola Panfiluk, born in 1995. He is a Crimean citizen serving in military service as a combat vehicle commander of a jet artillery division. He lived in Dzhankoi [a town in the north of Crimea] with his wife and son.

Mykola’s personal profile on the VK social network was open, so we also effortlessly found his wife’s profile, Oksana Panfiluk (Chusheva), born on July 26, 1993. Before deciding to fight for Russia, Mykola managed to take pictures both with “polite people” [a reference to “a monument to polite people” based in Simferopol depicting a little girl welcoming a Russian serviceman] and near the Lviv train station.

Interesting fact: as of 2013, Mykola was registered in Ukraine, Ternopil region, Kremenets district, Bilokrynytsia village, Lisotechnikum street. Also, on his VK profile, there are many posts from 2014-2016 where he wrote something in Ukrainian. His friend list is full of Ukrainians. However, he decided to come to “liberate” them from the Nazis anyways.

He was last online on September 8, but there is currently no information about his death.

Next, we identified Major Andrii Petrov, born in 1984, who serves as deputy chief of staff.

Before the war, Petrov seemed an exemplary father attending rugby matches with his son at the CSKA club, where his son plays.

Through the photos in the social networks, we also found an alleged wife of Petrov.

As for Andrii’s political views, those are mixed. He both has posts criticizing and supporting the current government. As we can see, in 2022, Petrov finally chose the side and expressed absolute support for the Russian government by going to war.

Sergeant Mykyta Pilukshin, born in 1996, is the commander of the combat vehicle of the rocket artillery division.

Most likely, the sergeant returned home, as we can see from this photo taken on September 14 in the Orenburg maternity hospital.

We also found photos of Pilukshin with his wife and children, although we cannot guarantee these two girls are his daughters.

He is the youngest of the identified military personnel of the Russian Federation. We found out that Mykyta Pilukshin has received a Zhukov medal, but we are not sure about the merits.

The next one is Major Maksym Shlykov, born in 1986, a professional soldier and a division commander.

Shlykov has been in the military since he was 17 years old (2003) – then he entered the Kazan Higher Tank Command School. He graduated in 2008 and served in military unit 36251 until 2009. Then he started service as part of the 35th brigade in Aleysk, Altai Territory.

Shlykov started his service in the 856th Self-Propelled Artillery Regiment of the 144th Guards Motorized Rifle Division military unit 23857 in the town of Pochep, Bryansk Oblast. We don’t know when exactly it happened.

We also managed to find the profile of Shlykov’s brother on Instagram and Facebook. He lives in Kazan and works as the editor-in-chief of KazanFirste, a local pro-Russian publication.

The next person is Sergeant Oleksandr Azarenko, born in 1993, serves as deputy platoon commander, commander of a combat vehicle.

Judging by the photo from Azarenko’s profile, he finished his service in 2103. Looking at his chevron, we can assume he served in the forces of the Federal Agency for the Safe Storage and Disposal of Chemical Weapons.

Afterward, he worked in the security service of the Legion security company.

Azarenko is open about his approval of the Russian invasion and encourages his son’s patriotic education (you can see it in the right photo from May 9, 2021). He is a member of groups that propagate Russian aggression, such as “For Victory” [“Za Pobedu” – Russian translation with a Latin letter “Z” Russian propagandists use as a symbol of their support – tr. note], and also takes pictures with various pro-Russian symbolics.

We found a photo with the inscription “Z #своих не бросаем” [“We don’t leave our own” — eng. tr.] on the avatar of his friend Maksym Panfilov, published on May 4 (on the left).

So, Oleksandr clearly understands the purpose of coming to Ukraine.

The last person from the list is Sergeant Oleksiy Teleshev, born in 1991, serving as a weapons commander.

Today, Teleshev, like many other occupiers, persuades himself that he is protecting Ukraine from Nazism. However, in 2019, he shared a photo contradicting this logic.

The second document that helped our identification process is the report on the dead and wounded servicemen of the 1st motorized rifle regiment of the Taman division of military unit 31135. According to this report, on August 23, 2022, four Russian servicemen were killed, and one was wounded.

We found out that military unit 31135 is located on the territory of the village Kalininets of the Moscow Oblast. Therefore, our “guests” did their military service almost in the capital of Russia.

Let us start with the deceased corporal Yevgeny Rusinov, born in 1984, a radiotelephone operator of the mortar battery of the second motorized rifle battalion of the military unit 31135. There is a photo of Yevgeny on the territory of that military unit, which is easy to prove comparing the walls of the buildings. The walls in the left photo, which Rusinov posted on social networks, and the walls in the photo from the official website of military unit 31135 are identical.

Rusinov lived in Yermolino, Kaluga Oblast. Before his service, he visited a knife fighting section in the Kaluga sports club, Steel Force.

Rusinov began to acquire secondary education only when he was 31 (2015), having entered the Yermolin Technical School, where he obtained the specialty of a technician.

The deceased left behind a 16-year-old daughter, Veronika, who enrolled in the same technical school this year.

The next is corporal Serhii Tikhonov, born in 1984. He came to Ukraine from the village of Ivanovo, the Central Federal District, which is more than 1,000 kilometers from the city of Izium, where Tikhonov “protected the population of Donbas.” Like Rusinov, he died in Ukraine on August 23, 2022.

It appears Serhii Tikhonov had a peculiar sense of humor and a strange idea about the content suitable for the profile of a Russian serviceman.

In 2011-2012, he actively criticized the government and spread Nazi symbols and anti-Semitic rhetoric.

But in 2017, the rhetoric of the profile changed as he appeared in military uniform and stopped criticizing the authorities. Tikhonov has two kids, a son, and a daughter.

The last on the list of occupiers is Private Mykhailo Gattunen, born in 1989, a mortar battery driver.

Three days before the start of the full-scale invasion, he turned 33. Gattunen arrived in Ukraine from the village of Tumba, Mauser district of the Republic of Karelia. The only thing that remains of him is the memories on the pages of his friends.

Will they be held responsible?

It is hard to say what compels Russians to participate in the war and why they leave their families, wives, and children. Why do they change their political views and agree to support the policy of the Russian Federation and fight against Ukraine? Why does a Crimean who was born and raised in Ukraine suddenly take the side of the aggressor? Why were the admirers of Nazi symbols and anti-Semitism heading to Ukraine to fight Nazism?

Unfortunately, we cannot answer these questions, but we would like to emphasize that the probability of dying in Ukraine for the Russian military increases every day. A military tribunal is waiting for the rest.

Gwara Media fact-checkers will collect as much personal data of Russian military personnel as possible so that none will escape a fair punishment.

We handed over the found documents to Slidstvo Info, a Ukrainian investigative project focusing on high scale crimes. You can also watch a video about identified Russian soldiers.