Studio 9 Film, Al Jazeera, Gwara Media to produce one of the first films to come out of Ukraine, showing life under fire.

Since Russia’s invasion on 24th February this year, Ukraine’s northern city of Kharkiv has experienced waves of targeted missile bombings and devastating destruction to the city. Studio 9 Films collaborates with Gwara Media to produce one of the first films to emerge since Russia’s invasion of Ukraine, documenting life under fire through the lives of its citizens.

Serhii Prokopenko, the managing editor of Gwara Media, a creative enterprise from Kharkiv before the war,  uses his creativity and adaptability to try video journalism for the first time. With his back to a building that has been reduced to rubble, he confides to his camera, ‘I’m not a war reporter and I don’t really know how to do this, but it seems like I’m learning’. Prokopenko is not the only citizen who has drastically altered his profession in the new face of war.

‘These are rescuers who dismantle debris, put out fires, and rescue people around the clock. These are people of all professions who have postponed their main work and are primarily volunteers,’ he says. 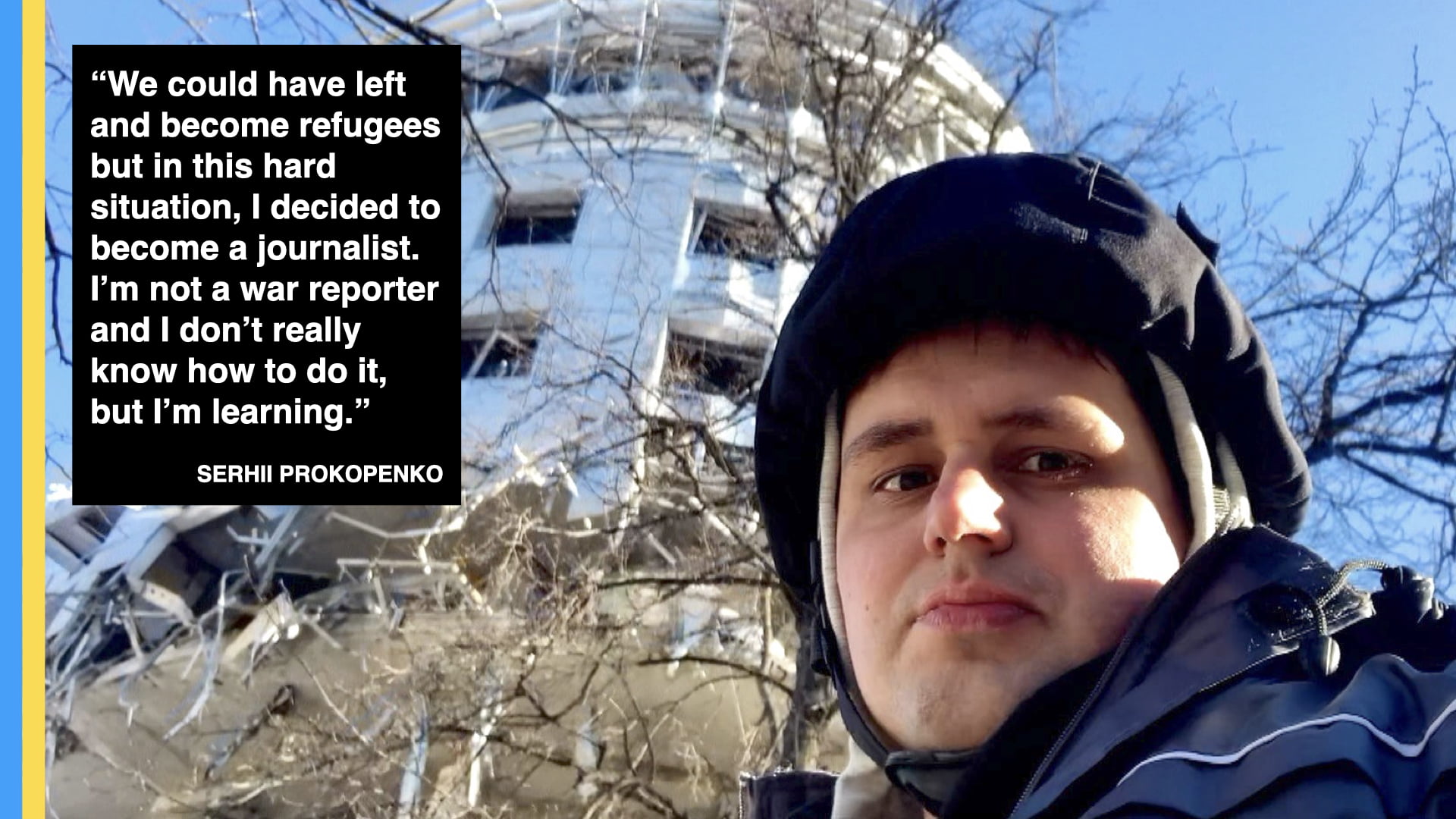 “It was the beginning of March when I saw a post from Kharkiv, offering local content and verified UGC,” says Studio 9 Films founder and Executive Producer Fiona Lloyd-Davies. She immediately contacted Serhii Prokopenko, CEO of Gwara Media and their collaboration started. Fiona brought in ex-BBC producer and friend, Allie Wharf and with Serhii and his two colleagues, Yaroslav and Oleksii, they started to record daily life for the people living in Kharkiv under constant Russian bombardment.

Yaroslav Ustich, born and raised in Kharkiv, is one of the film’s main protagonists. The twenty-four-year-old documents his new life, sheltering with his family in their second-floor apartment in Kharkiv, leaving the small space only for food provisions. “Sometimes it was hard to gather my thoughts and do what was required. Especially at the beginning, in those difficult first weeks”, he says. In his daily video diaries, Ustich expresses feelings of fear and anger – which are only intensified by his being limited to the two walls of his home. 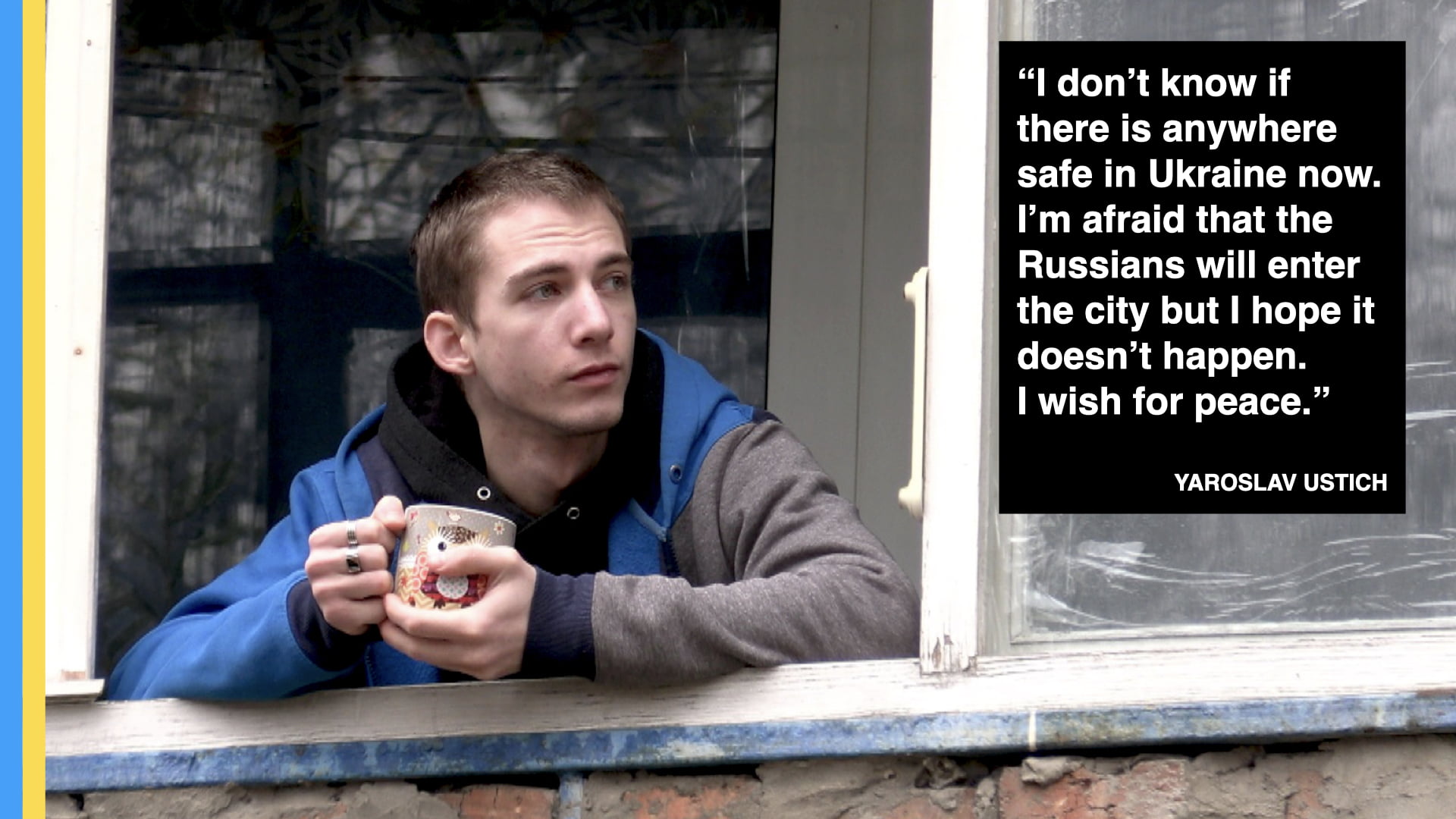 Also featured in the film is the owner of Hell’s Kitchen, Egor Goroshko, who volunteers to prepare food for those whose lives have been capsized by the constant attacks on the city. Working up to eighteen hours a day, Goroshko embodies the resilience of Kharkiv’s residents to protect their city, and more importantly each other, from the daily devastations each day of the war brings.

One of his volunteers, Andrii worked for a missile guidance system before the war but now brings food, medicines, and medical help to people on the frontline. On the day Serhii follows him with his camera he goes to an area pummeled by Russian artillery where they find 86-year-old Lidia Romanivna who has been trapped in her 5th floor flat. 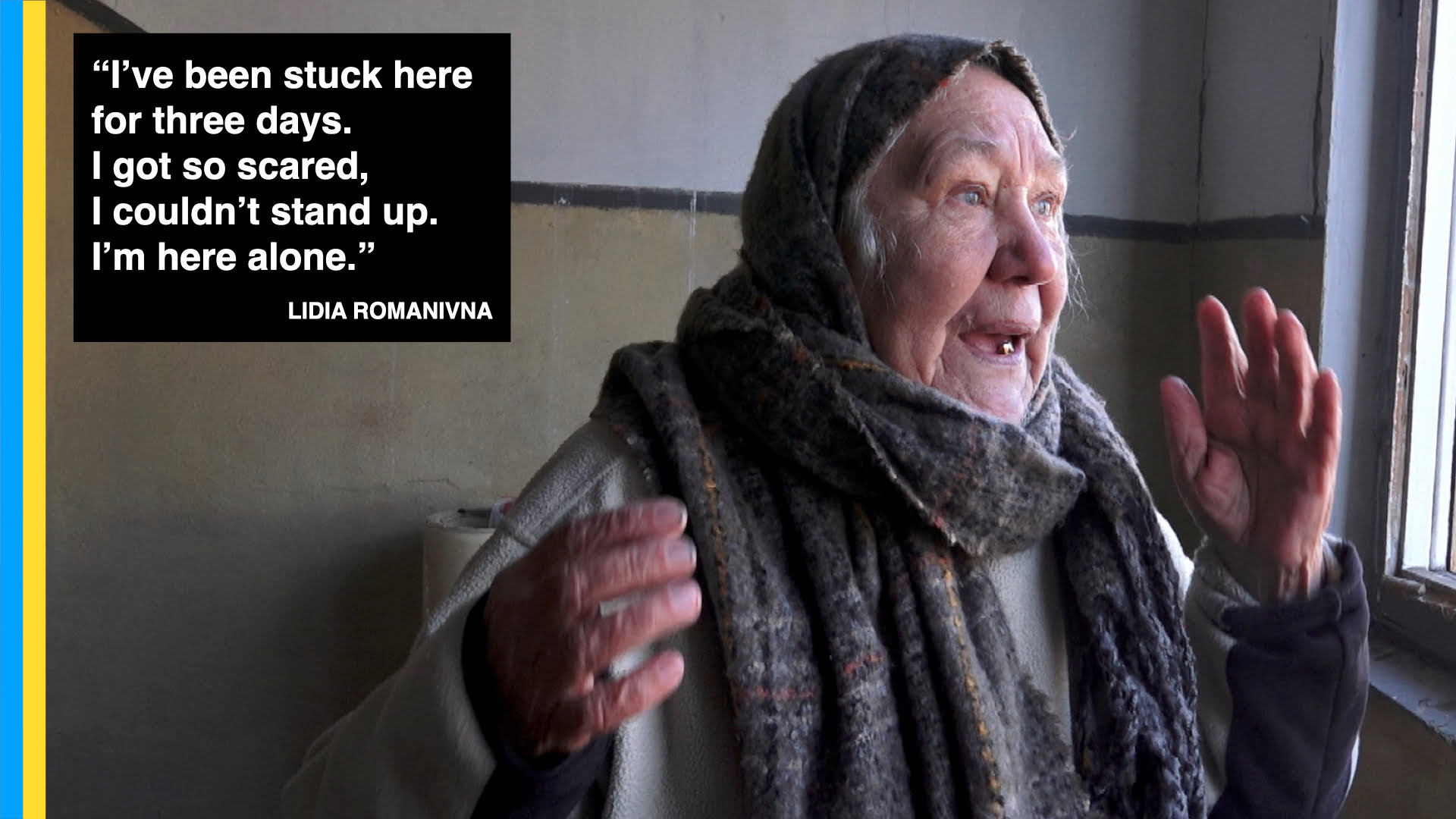 While authorities are reluctant to reveal the number of fatalities in the country’s second-largest city, regional governor, Oleh Synyehubov, put the official civilian death toll at more than 100 in March.

Within the same month, Kharkiv police estimated that around 250 civilians, including 13 children, had been killed since the start of the war.

Since the February invasion, Russian forces have bombarded Kharkiv with a relentless barrage of artillery, rockets, cluster munitions, and guided missiles. According to the city’s emergency service agency, at least 500 civilians have been killed in the city of 1.4 million people, with the attacks coming mainly at night. 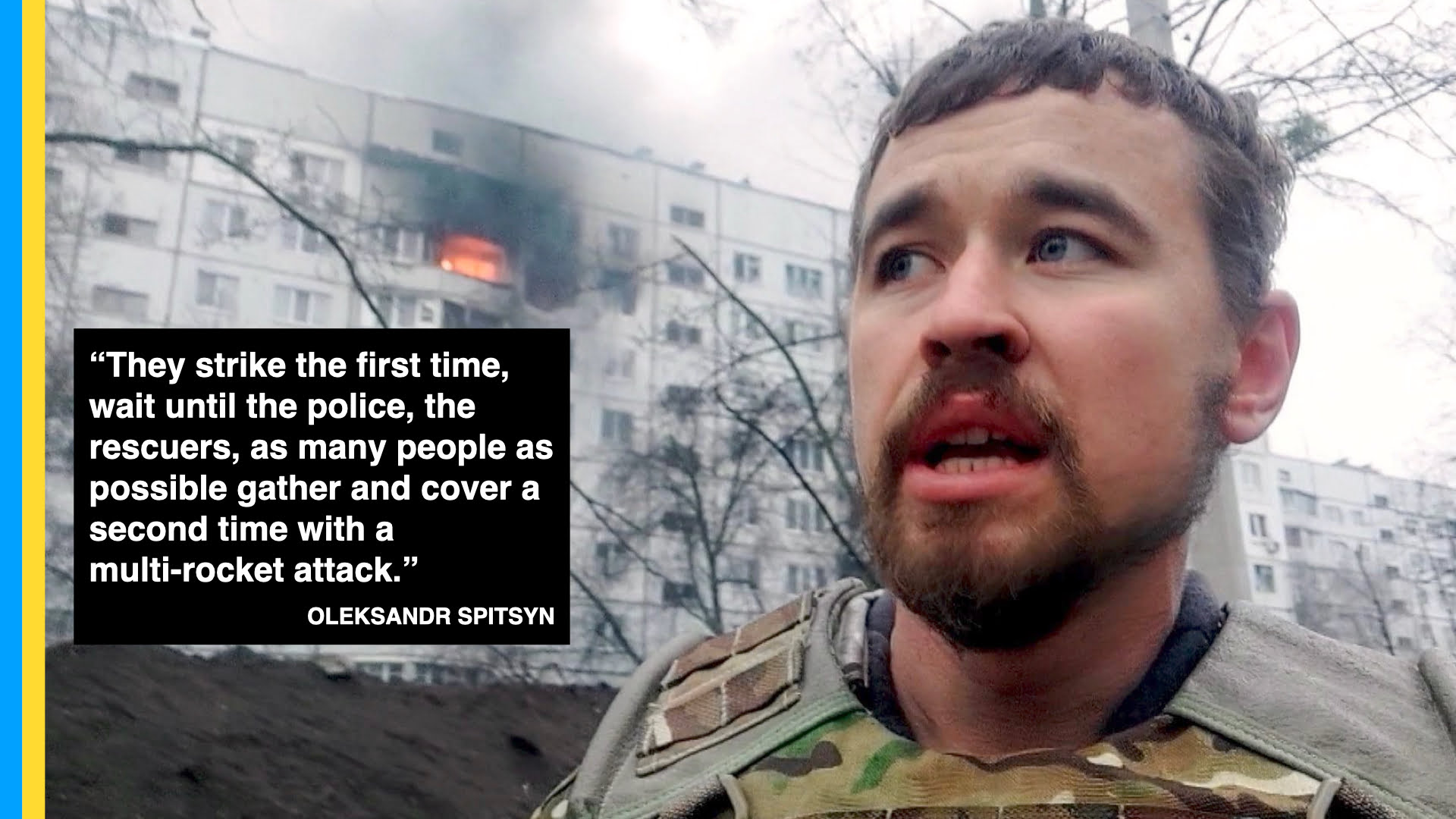 Maryna Filatova, Kharkiv Museum of the Arts, provides exclusive access to irreplaceable artworks damaged by changes in the temperature and pieces of broken glass following nearby explosions. Her contribution demonstrates how Russia’s destruction does not discriminate against Ukraine’s art, culture, and architecture.

More than 600 buildings have been destroyed since the start of Russia’s invasion, according to Mayor Ihor Terekhov in a televised interview in March. Among these are cultural landmarks such as the Kharkiv State Academic Opera, Ballet Theatre, Kharkiv Philharmonic, and the Palace of Industry; a Constructivist building dating from 1928 that is currently on a UNESCO list for consideration as a World Heritage site. 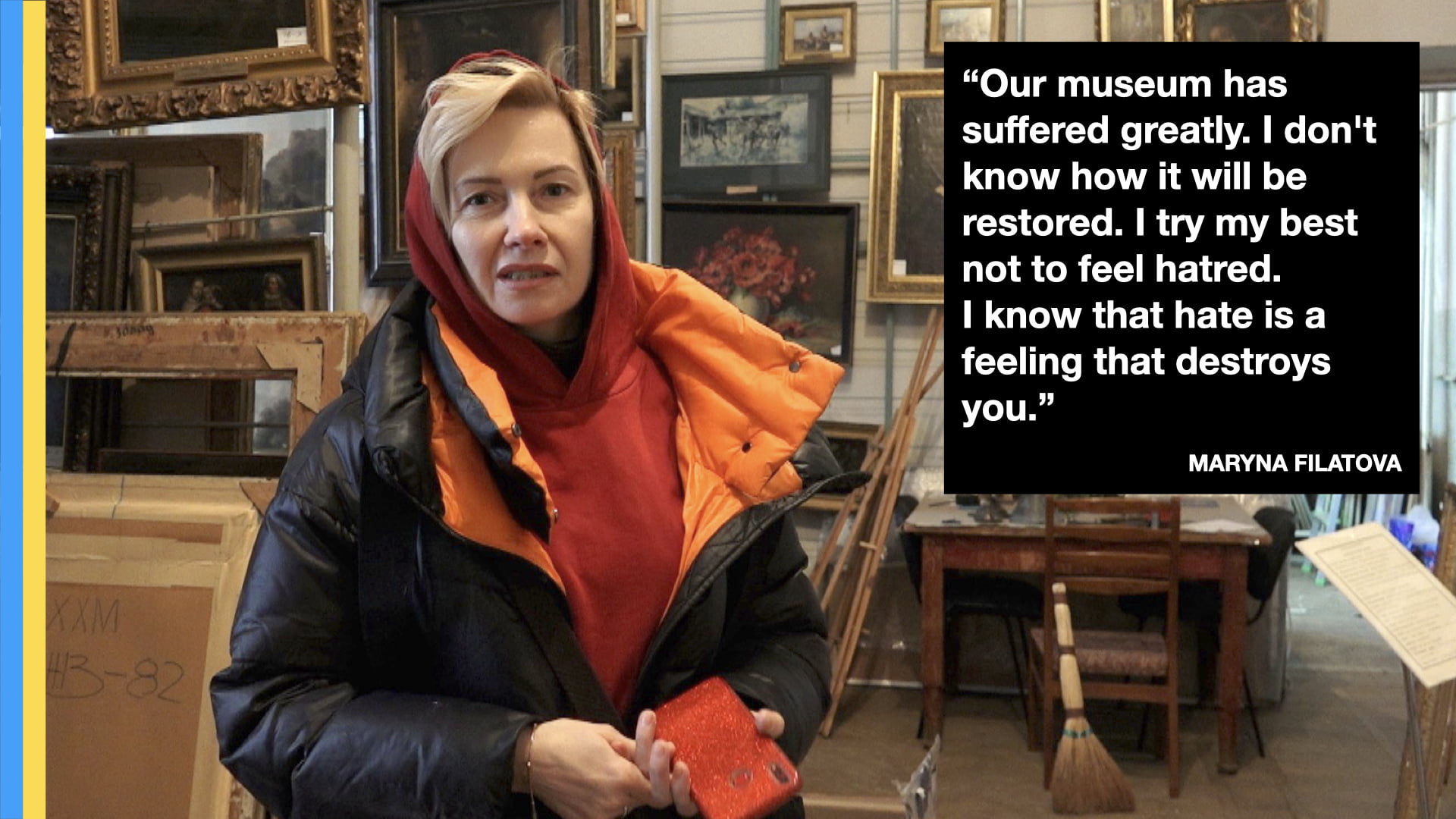 A city of nearly 1.5 million citizens has been reduced to less than 1 million. Streets have been destroyed and filled with rubble, and shellings continue to leave hundreds wounded. Yet, in spite of its destruction, Kharkiv and its people remain determined to survive and communicate their message with the rest of the world. Oleksii Yeroshenko, a Gwara Media contributor concludes, “Our teamwork was blessed. I’m sure it has a reason”.

Gwara Media is an independent media platform from Ukraine. If you are looking for a partner for documentaries, video and photo reports, or creative production – contact us. Let’s be light during attacks of darkness.

This story was published with the support of the European Endowment for Democracy (EED). Its content does not necessarily reflect the official position of the EED. The information or views expressed in this material are the sole responsibility of its authors.