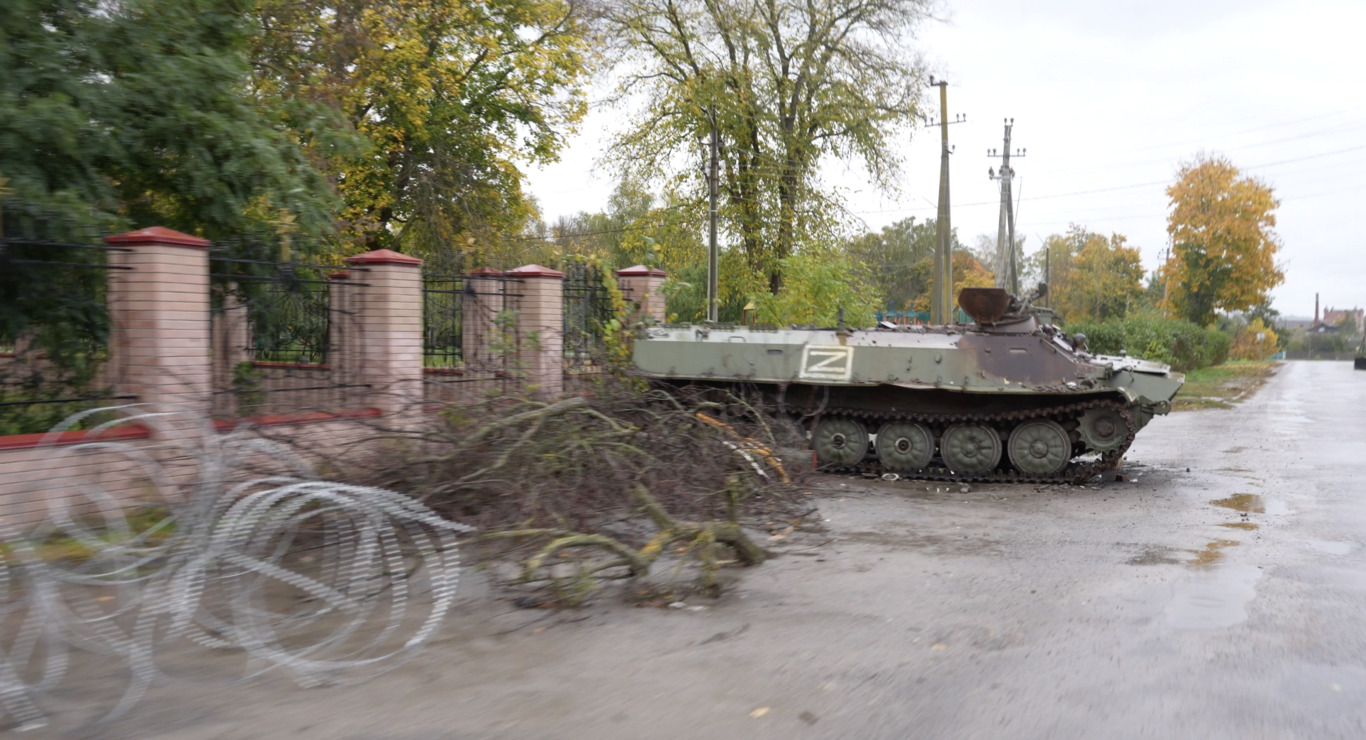 On the way to Vovchansk / Serhii Prokopenko, Gwara Media

We gather early at 7:30 and hit the road. This way to Vovchansk from Kharkiv in pre-war time took about two hours, but now in October 2022, we drove about five hours.

The matter is the dam near Staryi Saltov, which was damaged to stop the enemy troops. I have never been to this city, and the question “Why did we choose Vovchansk? How does the place with such a beautiful Ukrainian name live after de-occupation?”

The road is long: now instead of a smooth road, we are driving on dirt roads past Chuhuiv and Khotymla. We enjoy beautiful views: asphalt, forests, swamps, fields, again forests, water, pits, sunflowers, and uncut grain.

In some places, sunflowers are still unharvested: it seems to be October, should they have been harvested already? I noticed a rod from a Smerch rocket in the field (I’ve learned to distinguish them by size from Grad).

On the way, our column breaks down: the truck, which was not ready for such roads, tore out the exhaust pipe because of the pits. We want to help the driver: there are a lot of ideas, but he ends up pushing the pipe back with his feet on the ground, closer to the engine. Thus, they continued to drive without the exhaust pipe.

Already near Vovchansk we see the first mushroom sellers, but we can’t stop – the column is in a hurry to get to the city and back before dark.

Stopping near the town for a break, I see a lot of mushrooms. You can pick them up right by the roadside. On the other hand, it is scary to go to the forest without a metal detector and confidence that this particular clearing is already mined. I wonder how much the mushrooms cost and whether their price was affected by the mined forests, and there are no buyers – where is this balance?

The closer to town, the more damaged equipment there is. Here is the first burned-out IFV (Infantry fighting vehicle), here is some new equipment that we have not seen.

We discuss that it might be the newest Russian APC (armored personnel carrier), but we are not sure. We debate how much it costs – hundreds of thousands of dollars or millions. As we approach Vovchansk, we see a cannon that the Russians left on the roadside. The name “Ksyusha” is written on it. Who is this Ksyusha? Did Ksyusha with Z on the side inspire anyone? And where is the owner of Ksyusha?

We quickly pass the checkpoint and are already in Vovchansk.

We are passing by a bus with locals. The town does not look significantly destroyed. Yes, some of the roofs are damaged, but no completely destroyed buildings. We are heading to the city center, and the first car in the column is surrounded by people. They are given packages to sign, and the residents gather under the reason of bringing humanitarian aid.

This is the first time I see humanitarian aid with watermelons. Later it turns out that this is a feature of this town.

We are unloading humanitarian aid – people are standing in the rain and asking how to get it – by passport or some other way. We are moving on. For the first time here, I understand that this is the central square, but there is nowhere to catch the eye here because the town is provincial and not very distinguished by its architecture.

We pass a bridge. It is broken, but you can drive through. We ride cautiously, hoping that the crossing will not collapse under us, and keep the way to Vilcha village.

I recognized this phrase in 2019 when I found out about a project from the Chornobyl Historical Workshop, which documented the people who resettled from Polissia to Vilcha after the explosion of the Chornobyl nuclear power plant. This village survived. Before the war, there was a centralized gas pipeline, beautiful houses, water, and wide streets for a village. Now there is no electricity in the village.

In Vilcha, Russians organized a bread bakery during the occupation, but fled and forgot the baking equipment. Local resident Marina tells us that bread was sold for 38 UAH/$1.03, but the head of the village says that bread was 20 UAH/$0.54.

However, now they have no bread, and so far no electricity to be able to bake it. Pekelna Kukhnya volunteers want to restore the bakery and help the village of Vilcha and Vovchansk. The plan is simple – to pick up an abandoned Russian bakery, bring technologists and raw materials for bread from Kharkiv and make it for free or very cheap for local needs.

Here we are with the military, they treat us to borscht with bacon and garlic. This is unexpected because we hoped to have snickers, cookies, and chocolate.

Although it’s already October, it feels like summer here, everything smells like it’s in bloom: apples and pears are still hanging on the trees. While we are discussing Vilcha, a local old man comes and asks to charge the battery. I charge it. The old man says – I will bring you some gasoline. Soldiers: we will charge it anyway, but we will not refuse gasoline.

Maryna, a local woman tells about the situation. There is a geriatric boarding house in the village, there are 100 people in it, 50 bedridden and 50 active grannies. We are going there to get acquainted. We gave the medicines, underwear and other necessary things for the center.

Furthermore, we are going to look for the village head because we want to make a bakery and make an agreement. He is nowhere to be found. We start looking around the town. As a result, we meet him on the street and start talking right there. We go to the bakery.

Together with the technicians, we inspect the equipment. It is old and everything is written in Russian, it requires effort and almost no automation, but it is a chance to provide the village and Vovchansk with bread. We decide that today this is the maximum we can do, but it is enough. Our convoy meets in Vovchansk and moves back.

The road back is as bad as before – we drive for about 5 hours. We meet a truck and a car stuck in the mud. We have already figured out how to pull it out, but we see a tractor coming to the rescue on the horizon. Likewise, we extract it. We think about what to do with the trucks. But we pass them. Because the tractor is coming to help. And then we arrived in Kharkiv.

Vovchansk, in the North of Kharkiv Oblast, is located 3 km to the border with Russia. It was occupied on the first day of the full-scale invasion – February 24, and was under Russian occupation for more than 6 months. During the counter-offensive of the Ukrainian military, the occupiers moved their “regional administration” to the town for several days.
After the liberation of the settlement by the Armed Forces of Ukraine, local residents tried to get rid of traces of the Russian presence as soon as possible. Reports that the occupiers were leaving Vovchansk appeared on September 10. 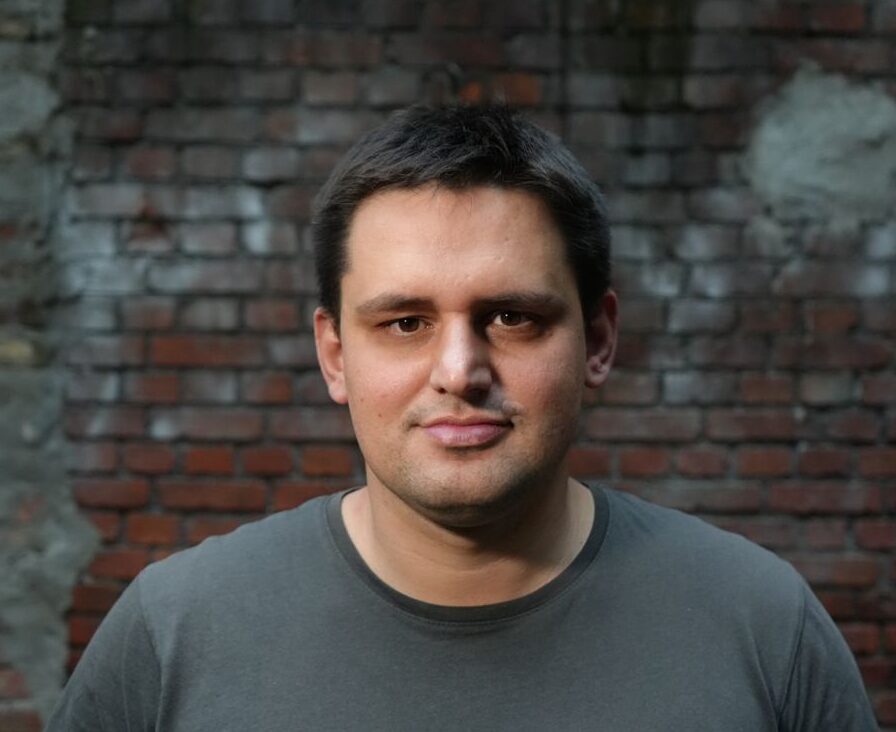