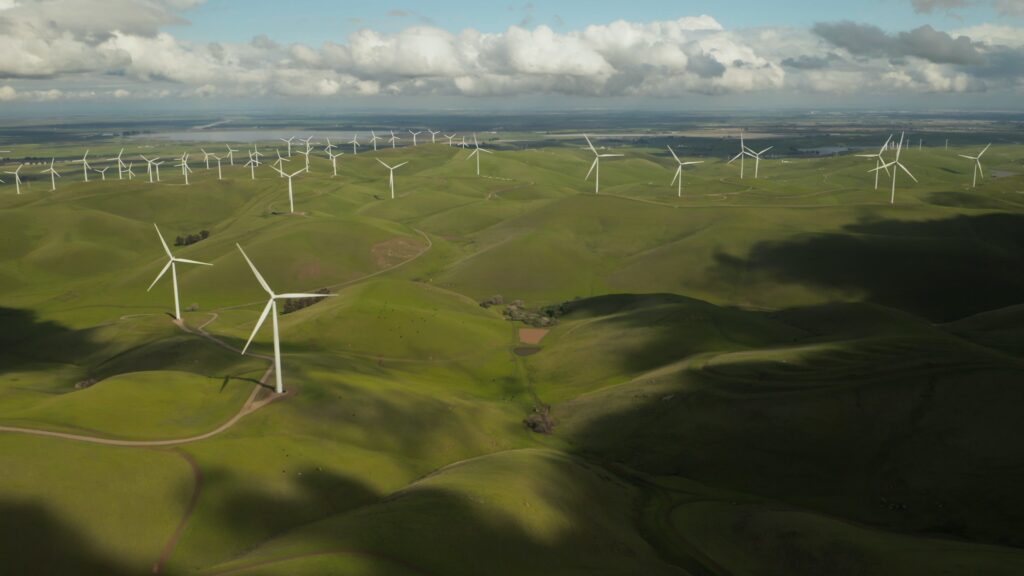 The PLATO NGO: Eco-activists Who Have Begun a New Era Against Ecological Problems

Lviv. Flashing lantern near the chapel. The smell of roasted coffee with croissants. A crowd of Ukrainian-speaking people: someone goes arm in arm with a loved one, someone is being late for the train to Kyiv, and someone is tired of walking, so they decided to enjoy the evening, sitting on a bench. The project that is changing the current attitude of humanity to the ecological state of Ukraine was born exactly in Lviv in 2019.

The Plato NGO is not just a group of friends from all over Ukraine who want to change something, but a team of like-minded people who have a clear plan for the future and an understanding of why they work. As the team members themselves explain, the name of the organization came from the famous allegory about the “Platonic Cave”, which symbolizes spiritual awakening.

In 2019, the UN Development Program in Ukraine launched the Safari for Communities project, the test was in Kyiv, and in 2020 the Plato NGO picked up the project. The Safari was implemented in Lviv and Bila Tserkva together with partners from the UNDP, the Biodiversity Protection Fund of Ukraine. In 2021, they scaled up in Kyiv and virtually all over Ukraine, conducting online training for about 300 participants from all over the country. They also organized “safari hunting” offline in three communities of Ukraine: in Kropyvnytskyi, Rivne, Poltava, and Myrnohrad. The competition took place between 19 teams from five cities. Two teams from Rivne, one from Kropyvnytskyi and one from Myrnohrad won and received funding for the implementation of their nature-oriented projects.

“Having founded this organization, we set the climate issue as the goal of our activities. Our aim now: adaptation of urban space to the effects of climate change, such processes as hot weather, flooding, biodiversity change; direct implementation of nature-oriented solutions as a tool for adaptation of urban space. We strive to work in the format of participatory presence. First of all, we try to have a dialogue with the executive structures of the community, for example in Lviv, to find solutions in climate policy together, and not just to say that the city council is doing nothing and everything is bad.

It is important that Safari for Communities is a project that can be implemented by any team, whether it is a small micro-community of a district or city or a neighborhood. After all, all methodological materials are publicly available and people can use them. We would like Safari for Communities to be scaled to different parts of Ukrainian communities so that people can organize this online learning process themselves. If we talk about the study of the city, it would be good for people to join this process and organize such “Safaris”, urban hunting to explore the urban space, to identify potentially preferential locations, to implement nature-oriented solutions, and so on. Our goal: together with partners, in particular with UNDP, to promote nature-oriented solutions as much as possible and thus scale them as an effective and relatively budgetary mechanism for adaptation to the effects of climate change.

The Plato NGO used an unusual idea to encourage local people, transforming the usual overview of the city’s problem points into a quest-style game. First, a small group inspects the selected area and looks for places that need redevelopment, and then decides on changes. The beginning of the “Safari” was in Lviv, where more than 40 locations that do not meet the requirements of environmental standards were noticed. It was also possible to organize such meetings in someone’s city. For example, pruning trees near the houses could be done better, and with this project, one can get with the company and together solve the problem.

In its social networks, Plato shares environmental solutions to improve urban life everywhere in Ukraine. Next, we will talk about the initiatives that you can use for your home, yard, city, and town.

The Safari for Communities project team concluded that a large amount of waste is generated due to the presence of outer markets. The idea of ​​composting was quite logical, so we decided to work with it.

This is a process where organic waste, namely food that people throw into the general landfill, can be turned into fertilizer or even soil through composting.

In Kyiv, activists set up a special place at the Zhytniy outer market to throw away the remains. Despite all obstacles (the reaction of sellers and market visitors, maintaining the composter)  a team of volunteers can present this project and set an example for others.

The team leading the Living Wall project faced the problem of locating the initiative because a bridge was to be built near the planned site and there was a warning that the wall might be demolished or not built at all. Now the “living wall” adorns Naberezhno-Khreschatytska Street. The 25-meter wall looks a bit different than the team had planned, but the landscaping was created precisely to prevent dust and noise, as it was planned.

Also in its chatbot in Telegram, the Plato NGO offers a solution that can be implemented in every city. You can find more than ten unusual ideas related to the “green city” on the channel. Here are some of the most applicable solutions that everyone will be interested in.

The green stop has the same functions as usual, but its specific feature is the presence of vegetation on the roof and near the stop.

This stop supports everyone who wants to use its possibilities. It primarily offers comfort for people. Because of the vegetation, some part of the stop is in the shade and the humidity level is maintained. This place was very popular during the hot summer of 2021.

The bus stop in Lviv on Halytska Square, which was established in 2015, is now located elsewhere.

There is a large number of outdoor animals in every city. We cannot take care of all four-paws and winged friends, so this is a one-stop solution. Also, our pets on their walk can shamelessly replenish their water balance. Containers with stored water can be different, but they are designed to help animals.

Lack of drinking water can provoke dehydration, which subsequently injures all our processes. Animals are similar to humans. Drinking bowls help them get enough liquid and maintain water balance.

Ukrainian cities already have the resources to work with drinking bowls.

The most important thing is to monitor the quality of water in such drinking bowls and the safety of devices to avoid conflicts with lawbreakers.

The green roof is the last floor of the building, covered with a green carpet and plants. We saw it in elite complexes and were secretly dreaming of having something similar.

Firstly, from the ecological point of view, green roofs clean the air and improve the microclimate of the area. Also, if each building had a green roof, it would be possible to stop using rainwater drainage, as such a structure is able to retain water. Secondly, from a social point of view, in such an area you could have fun with the company or think about your business ideas alone, drinking coffee from an eco cup.

An example of a green roof in Austria

Green parking space is an area sown with lawn grass and fortified with special asphalt. So, several dozen cars can be parked there. It combines the incongruous.

Transport creates harmful gases. Plants act as a natural filter and purify the air, so it is considered that green parking space is the most environmentally friendly option for parking.

Despite the significant number of cars in Ukraine, there are only a few green parking spaces. There are 35 such parking lots in Vinnytsia since 2017, also in Rivne, and in 2019 in Rivne eco-parking space was built at the expense of the community.

It is clear that pocket parks were named so for a reason. It is a matter of size, which distinguishes such a park from a large one. It is usually visited to relax from the hustle and bustle of the city.

Such places allow you to forget about your urban problems and being in the city. They create shade and filter the air by biodiversity.

The United Kingdom is a leader in creating pocket parks.

Completely or partially filled with a greenery facade is located on the outside. In some houses, such a wall is formed on its own, it depends on the type of vegetation.

Green walls are useful throughout the year because in winter they retain heat, and in summer, on the contrary, do not let heat inside. Thanks to the greening of the facade, the residents of the building receive sound insulation from street noise and protection of the house. The owners of the green wall are lucky with the quality of the air. Also, such a building looks aesthetically pleasing, and the green color has a good effect on the mood.

HOW DO THE BOT WORK?

After activating the bot, the user receives an alternative of 4 options. If you have witnessed a “catastrophe” that needs a solution, you can fill out a questionnaire to propose a solution in the “Hunt the problem” tab. There is a list of seven different problems from noise pollution to biodiversity loss in the “About Problems” tab. For example, you need to overcome the hot weather in Ukraine. 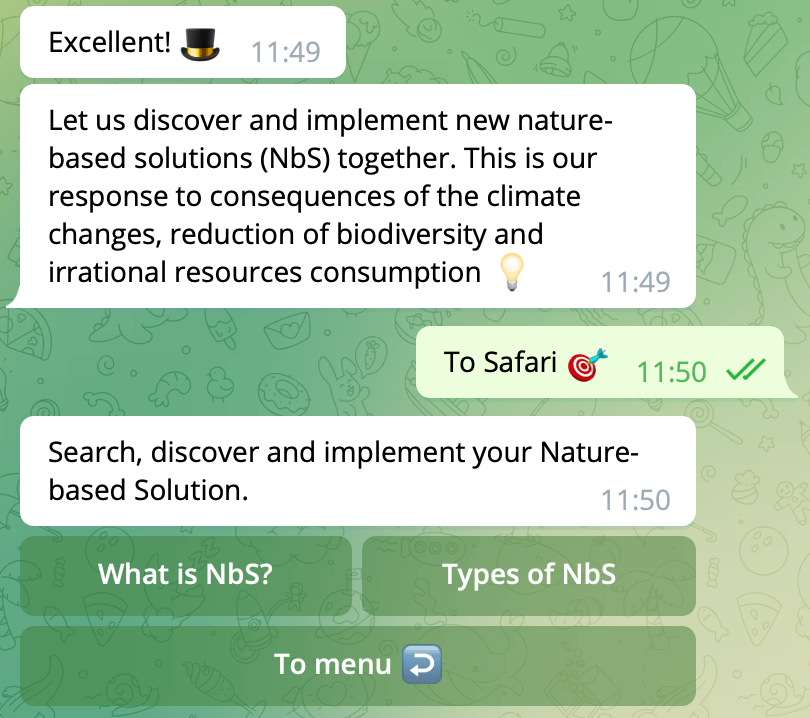 When you click “What are the solutions?” the bot recommends a solution to solve this problem.

It is also possible to see different ideas for landscaping the city in a separate tab “Solutions”.

The material was created by Kateryna Romanenko from the Gwara Media volunteer program.