Staryi Saltiv. Stories from a Scarred Village in Kharkiv Oblast

Staryi Saltiv is located on the right bank of the Pecheneg reservoir in the Vovchansk district of Kharkiv Oblast. It used to be a popular recreation spot for Kharkiv residents who came here to spend weekends on the beach and walk the pine forest.

The village was captured immediately after the start of the full-scale invasion. It was liberated on May 4. Residents who survived all the difficulties and realities of life under occupation still remain here. Gwara Media visited Staryi Saltiv to talk to the locals.

The mobile connection disappears as soon as we leave Kharkiv. The only thing that remains stable is the propagandist radio. The first words we hear is the passage “Everyone has been fighting against Russia for many years, oppressing us with a monopoly”. Nothing new here, so we immediately turn it off.

Our route runs through the village of Kutuzivka, which was liberated from the occupation a bit earlier, on April 28. About 200 residents of the village were forced to live in basements for two months. Along the way, we see the damaged gas stations, houses, big boards, and cars. Despite such a tragic situation, utility workers restore all roads and bridges as quickly as possible. We start our journey on Sunday at 8 a.m., and the road workers are already doing their job.

After Kutuzivka, we pass the village of Pisochne, also destroyed by Russians. Although it hasn’t been under occupation, it has been shelled constantly. After that, we pass Fedorivka and finally reach the dam leading to Staryi Saltiv.

Before the war, it used to be a cozy place for walks with many sanatoriums and rest houses here.

Since the bridge across the Siverskyi Donets has been destroyed, Vovchansk can only be reached by water. Therefore, boatmen work from morning to night to help transport people and parcels. Instead of vacationers, there are either residents or volunteers. We meet people who are transporting food to Vovchansk for homeless animals that no longer have owners.

We get to know the boatmen. One of them is Danya, a 15-year-old boy. He works here daily from 6 a.m. The teenager comes here by bicycle to help people return home. First Danya had to use oars, then he was brought a motor and things became easier. The boy says that he is not studying now, because there is no connection, therefore no schooling.

On the bridge, we meet a man who has come to take his friends from Vovchansk to Kharkiv due to the tough situation in their settlement. He stayed in the village under occupation. The man says that the invaders were on a rampage. They were looking for the military and people who had taken part in the anti-terrorist operation in Donetsk and Luhansk oblasts and checked the phones. Just for liking a post “Glory to Ukraine” on social media locals could get into trouble, adds the man.

The most dramatic moment of our trip

We have witnessed the family reunion. The senior couple lived in Vovchansk, and their children and grandchildren in Stariy Saltiv. And now, before our very eyes, they meet. Grandchildren, grandmother, and grandfather – we see tears of happiness in their eyes and feel both sadness and joy at the moment. They had been waiting for this too long.

On the dam, we meet different people. Some look at the destruction with interest and some with pity. Some came to help others and some needed that help.

We talk to the policemen from Ivano-Frankivsk, who arrived here to help. They tell us how they came under fire near Kupiansk, and how they caught the sabotage reconnaissance group.

We are about to leave when Danya shouts:

– Careful! Take out the camera and shoot!

I look up and see a truck about to go down to the boats.

Danya says that this is already the second car, the first one could not lower the load down and simply turned over. I am just watching the truck, and suddenly hear a voice behind me: “I wouldn’t be able to do that!” I turn my head and see a woman standing there. She brought the volunteers from Vilkhivka here and is waiting for them to return.

She says that their village has also been pretty much affected. The houses are left without doors and windows, and the post office and school do not work. She spent all the time under occupation in the settlement and managed to leave only about a week before the liberation. The Ukrainian military recaptured Vilkhivka on March 25.

Meanwhile, it is time to continue our way to Staryi Saltiv.

Here is the mutilated House of Culture. Now, instead of performances, it distributes humanitarian aid, from food to household items. We talk to women in line. According to them, the occupation did not change much in their lives. They just continued to do their work.

The locals recall that not a single day went here without shelling. Now they are recovering from the occupation and getting used to silence. We proceed to the local school. Educational institutions here are the buildings most affected by shelling. Cars around the building have been destroyed. The windows are broken, and some adjacent rooms are left without ceilings and walls. We go inside and meet the school headteacher. He came here to take the certificates for the school graduates.

From the inside, the school looks no better than from the outside. We see the scattered notebooks and textbooks and home tasks for Feb. 24 still written on some of the blackboards. But what impresses us the most is that in the middle of the destroyed building we see the intact things that no one has taken from there. The new desks, school appliances, and equipment – all this is waiting for rescue.

On the first floor, we see broken dishes and discarded children’s clothes: shoes, sports uniforms, and jackets. All the things that students left in their classrooms so as not to carry them home every day. Feb. 24 was supposed to be an ordinary day for every student, to maintain the simple routine of doing the homework, changing their uniform, and gaining new knowledge. But in reality, they had to look for shelter.

On the way back from school, we meet two women. They are going from the House of Culture with humanitarian aid, having spent six hours in line. They received bread and film to somehow cover the holes in the houses.

They tell us how they spent three days in the basement before the liberation. It was scary to go outside, so they ran home just to feed the pets and then back to the shelter.

As for the abandoned things in the school, they say that there is no one to take care of them. Everyone has run away.

“I went to school. Everything there is just lying around. So many books are going to the bad, and the desks could also be covered at least with the same film. Or find an intact room and take everything there.”

There are no young people here now, everyone has left. In general, about 300 people remained in the settlement, while almost 8,000 people lived here before the war.

And although the times are difficult, hope is the last to die. The women speak enthusiastically about their saviors, the volunteers who took people out from under shelling.

As soon as we have decided to find them, the volunteers come to us themselves. Mykola and Yura are brothers. They are local: have lived in Staryi Saltiv all their lives, and graduated from the school, opposite which we are standing. They tell us about their activities.

“We try to bring hygienic, chemical household items. There are things that we receive from partners, and sometimes cover the costs from donations,” the volunteers add.

They have their own channel SlobodaUA – a free territory. Mobile teams are responsible for particular areas, and these guys are attached to their settlement.

– When were the fiercest battles here?

– There were no such explosions in Saltiv, only when our soldiers entered the checkpoints and the Russians began to flee.

– Here, almost every one of our trips ended with shelling. The last time our car was damaged was when we were taking a senior man out. But thank God, everyone is alive.

According to the volunteers, the school, bathhouse, 75% of residential buildings, and all critical infrastructure suffered the most.

“When we were trying to take the women and children to a safer place, away from the strikes, one woman shouted that her child was left on the fifth floor. I told her to run after the kid, and she said: “I can’t, my legs are shaking, there has been shelling.” So we went to pick up the child. On arrival, we took 10 more. Our car was designed for eight seats, but 16 fit in there.”

The volunteers say that they met the motorcades from Rubizhne, but when the shooting started, people became afraid to go. The guys continue to help everyone who needs it. And we say goodbye and continue our journey.

Our way home lies through the above-mentioned village of Rubizhne, which was liberated by Ukrainian defenders on May 10. It is located in the Lozova district in Kharkiv Oblast.

We pass by the crushed civilian motorcade. Now people bring flowers there. A little further away we see a destroyed Russian tank. A burnt Russian jacket was found nearby and taken to the museum.

We call Rubizhne a ghost village. It seems that there is not a single living place left there. Even the trees are all broken.

We have decided that no one lives in the village, but then we meet several people. We see two women talking to each other and we decide to interrupt their conversation.

The women tell us they have come here for the second time to their parents’ house. They need to put a little order in the household if you can say so because there are almost no houses left. Until Feb. 24, one lady owned a shop here. Now she has nothing left. The women say that today while they were arranging the things here they heard the sounds of shelling. Actually, while talking with them, we also hear close explosions.

“There were brutal hostilities here. All 4 months. When “ours” [Ukrainian military] came here, they told us that we should leave the place immediately, as the artillery was ready. But eight people stayed in the village, as they had nowhere to go, and some simply did not want to. One woman was sitting in the middle of the field, she had nothing left, and still, it was impossible to take her to Kharkiv.

During the occupation, the Russians simply ran from one side to the other. They did not stay in one place, they were constantly on the move.

The worst thing was when we were sitting drinking tea with my daughter. She is 20 years old. At that time, the Russians arrived and stopped near our house. Then we got scared and decided to hide. We thought that they wanted to settle in our house. But it turned out that they were running away from ours [Ukrainian military].”

The local woman says that the Russians attacked everything they didn’t like.

Despite the difficult circumstances, even though cities and villages continue to be attacked, people are returning home to help those who remain in need. They want to rebuild what the Russian invaders have destroyed with such hatred. These stories of Stariy Saltiv residents show that the Ukrainian people cannot be broken. 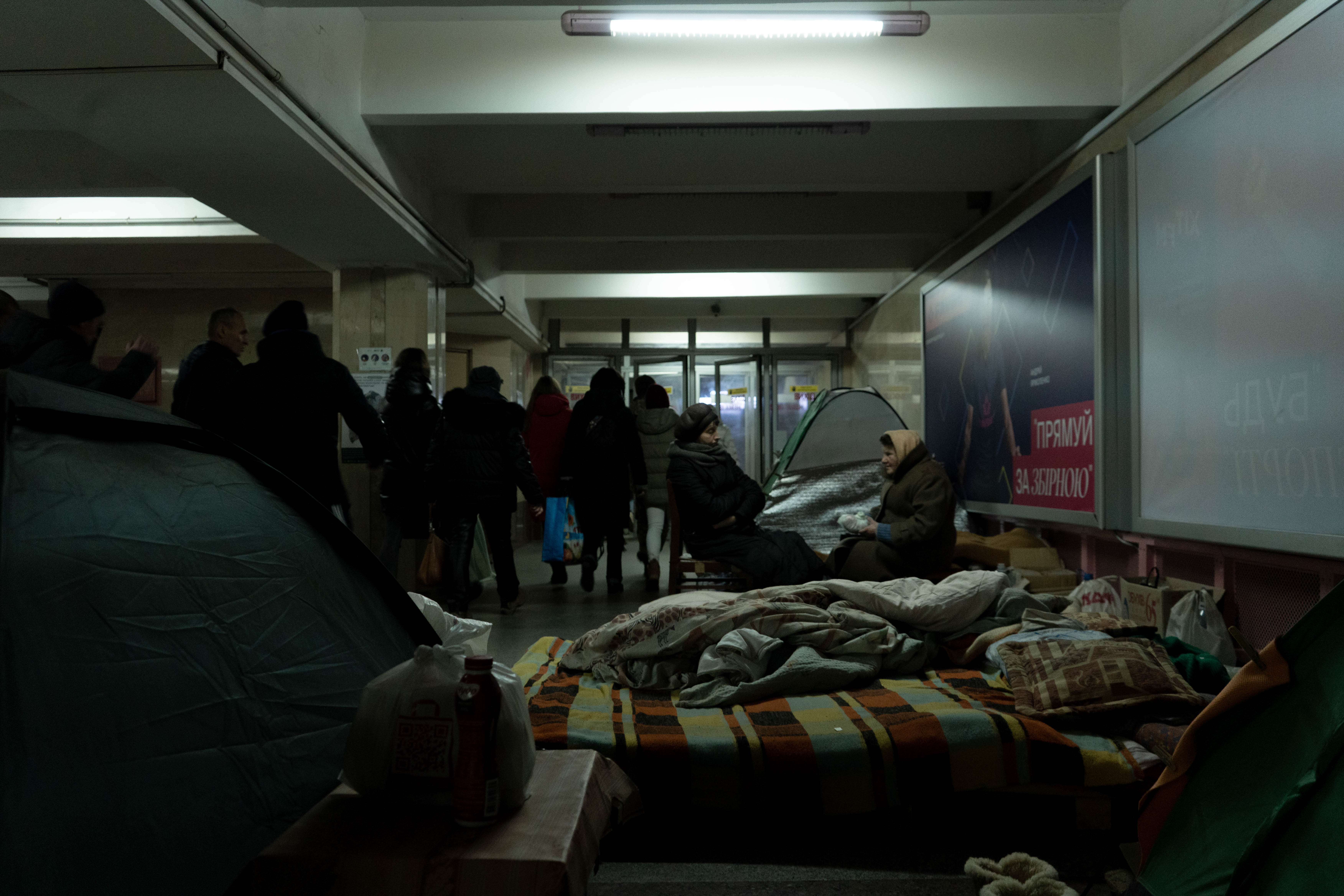 Kharkiv Subway to Become a Home: Stories of People Still Living in a Metro Station