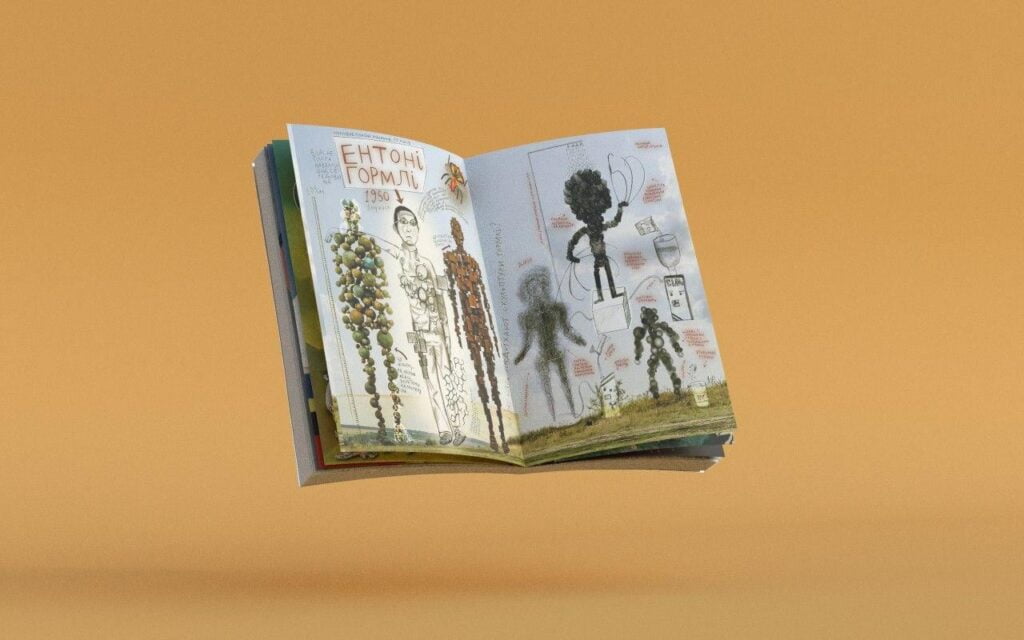 “Closer than it seems. A Guide to the History of Contemporary Art” is a book and exhibition project by the Aza Nizi Maza studio, which outlines the history of contemporary art for children and adolescents. The main goal of the project is to involve young readers and viewers in the creation of independent artwork through their own experience and gradual acquaintance with the artistic practices of the XX-XXI centuries. An important part of the project is the work of students of the Aza Nizi Maza studio, both archival and completely new, which will largely define the format of the book and exhibition as a “history of art for children told by children”.

This is a complex project with three components:

In the XX-XXI century, art gradually expanded its boundaries, and artists not only made paintings and sculptures but also fought for the opportunity to consider art very different, at first glance, non-artistic actions – from complex and dangerous, to simple and ordinary. Children and their parents will be able to learn about these manifestations by reading the book, as well as accompanied by teachers of the Aza Nizi Maza studio and contemporary Ukrainian artists during the exhibition and masterclasses. In the book and exhibition, the studio plans to tell the history of contemporary art through various topics: comparisons with children’s experiences, stories about individual artists, the practical side of the art process, revealing the main question – what can young artists do in the modern world?

We met with the founder of Aza Nizi Maza Mykola Kolomiyets and asked more about the project:

“A lot of work has been accumulated in nine years. We consider it important to make this archive as public as possible, so that it remains as active energy. The curators chose the format of the book because the exhibition is short-lived and the book does not depend on time and place. From the point of view of contemporary art, the book now reaches the level of exhibition projects. Many artists have a feeling that it is more effective to make books than exhibitions in terms of the degree of audience impact.”

“The book consists of nine chapters that deal with global practice, the world of abstraction, nature, mechanism, street intervention. Each study shows the artist, his practice, and the child’s response practice. After reading the book it should not be scary, but interesting, there may be a desire to offer your own concept. There is even a direction of so-called paper architecture, when an architect creates an idea on paper, but does not think about its implementation. The history of European art of the XX century is based on danatos, overcoming fear. In the European tradition, the main concept is the hero, the paradigm of thinking – drama. The child loves the terrible because overcoming fear encourages personality development: terrible dreams, drawings psychologically strengthen empathy. Fear is the main dramatic color of art.”

“Francis Alyus has created a project with walks, for a child every outing is an adventure through the world of fantasies, not just an evening exercise. So in the twentieth century, artists approached the practices that surrounded us in childhood. The only difference is that the child plays for himself, pushes his own boundaries, and the artist always speaks for society, pushes the boundaries of society.

In our book, we decided to repeat the experiment – to tell children about the practices of contemporary art, creating a work on the changed rules of the game, with the potential to develop into their own work. We want to make the book motivating, to destroy the idea of ​​the art world as strange and incomprehensible, when concepts and manifestos frighten the viewer. Both the artist and the child seek to go beyond, to invent an alternative, richer reality.

Mirror neurons work well for a child when he repeats something. For example, if someone in a group has done something interesting for others, he introduces a certain fashion in which others develop their own paintings. From time to time we gather to review the works, and children explain, tell, rethink their pictures. For example, the boy Mark chose John Cage (composer, artist, mycologist). One of his instruments is a dissected piano, broken and distorted by garbage. Cage kills the piano as the king of instruments but forms a new meaning of the massacre of tradition as an instrument of musical search. And Mark transformed this into a picture of Cage growing mushrooms on a piano – a symbiosis of music and tradition. This is an indirect art of the land, which changes the perspective, the function.”

Usually, in the culturological literature, two concepts are used: chronology or evolution of “-isms”, mutual influence of directions. However, in the history of art, there is a plane that is almost not explored – the plane of the game. Until the twentieth century, the history of the arts continued linearly, because it was protected by tradition, and the rules of the game were drawn up in accordance with its conditions. In the twentieth century, there was a coup, which was actively manifested in the era of Impressionism when artists abandoned the tradition. This led to a change in the conditions of the game, the rejection of the perception of the world in terms of dogma. The focus shifted to self-knowledge of nature, the priority of sensations, conveying transience, which was against the rules.

This path narrowed the view of reality, the world of art. The artists themselves chose the boundaries: for example, narrowly specific studies of Matisse with rhythm and color embodiment. Picasso proposed a game form of art, he invented new rules of the game every five years, each time creating a new aesthetic for himself. At the same time, Malevich summed up the “Black Square” that the tradition no longer exists. Breaking away from tradition, the artist did not get anything and did not win, on the contrary – became vulnerable, set a tender inside society. As a result, the artist’s opinion has become insignificant: you invent the rules of the game yourself – so society can deny them because they are not supported by tradition. Gradually, the cult of identity began, the artist’s opinion turned from a statement by a demiurge into an ordinary history of rules.

Children’s view of art coincides with the manifestations of creative pursuits of the XX century: everywhere there was a manifesto – instructions for the operation of reception, style, they are all archetypal in relation to children’s works. Let’s take any principle of a painting of the XX century – we will see an analogy with children’s organics: surrealists were fond of collecting, artists in action painting poured paints. In adults – a revolt against the social order, in children – a revolt against the actions imposed by teachers, parents.”