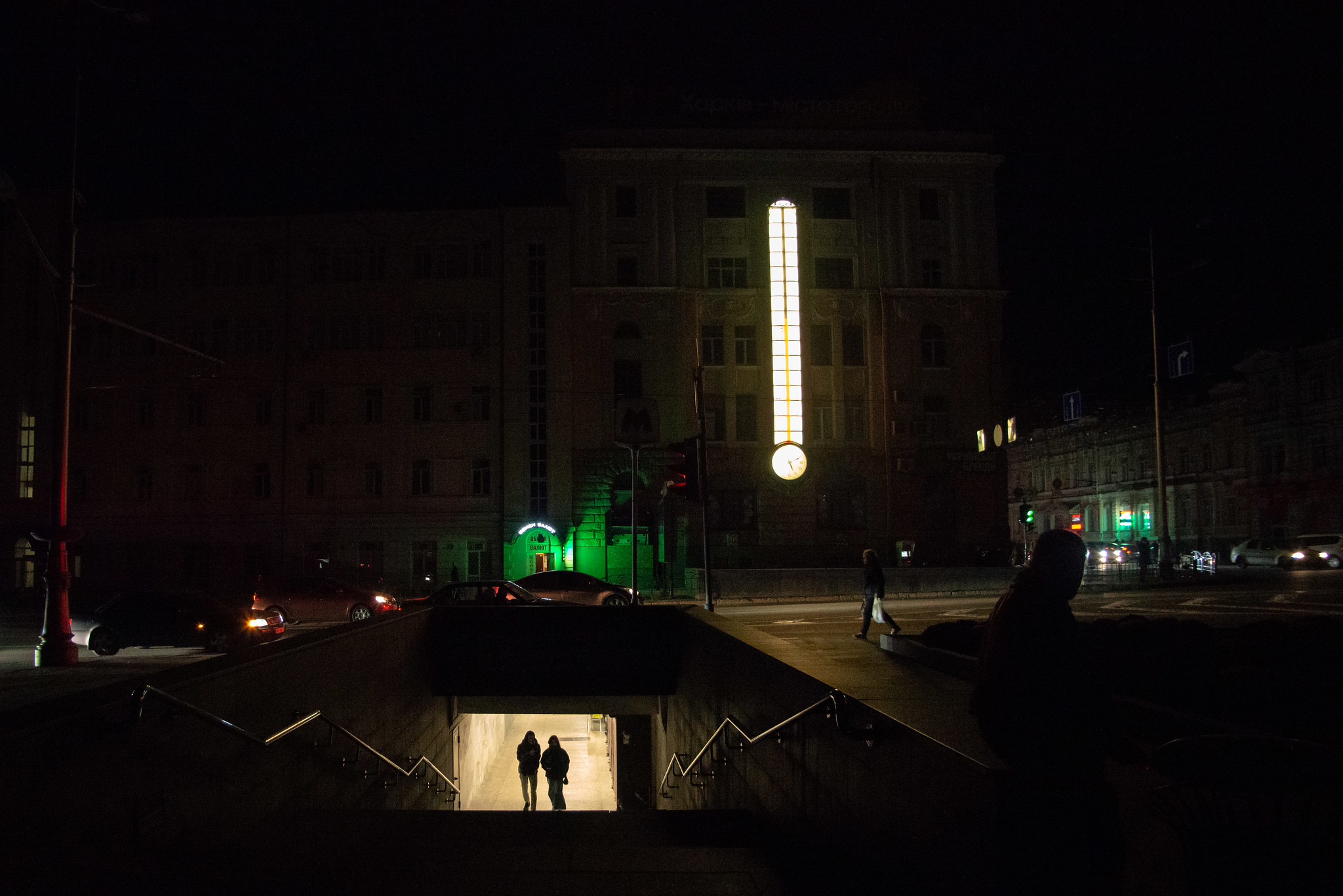 Kharkiv in the Dark. How the City Lives Without Electricity – Photo

One of the city landmarks, the giant Thermometer in Constitution Square, is the only illuminated object in the central square of the city. / Photo: Oleksandr Magula, Gwara Media

The Russian military continues shelling Ukrainian critical infrastructure, so serious energy-saving measures have been implemented in the cities.

In this photo report, Gwara Media shows the Kharkiv streets in the evening and how the residents adapt to live in the dark.

“Energy cut” has become the word of the month – or, to be precise, months – for the Ukrainians. During this time, we have learned that power outages can be planned, emergency, or stabilizing. In reality, all these power cuts look the same: electricity goes out in our houses, and then the water goes out either.

Today we may have no light for several hours, and tomorrow whole eight or 12. Sometimes there are no outages at all.

Besides the residential buildings, mobile operators also suffer from blackouts. In theory, the cell towers are equipped with autonomous backup power sources. In reality, when the entire residential area is cut off, they also stop working. In just a few hours, the “sag” of the network becomes notable, and even the 4G mark does not guarantee that you will be able to download an Internet page.

The same happens to the Internet at home. So with each outage, hundreds of thousands of Kharkiv residents find themselves in a “digital vacuum.”

The streets in the dark

The changes in Kharkiv now compared to the pre-war city become most noticeable with the onset of dusk. It’s getting dark early now, and the street lights haven’t been working since the beginning of the full-scale invasion. Even on Sumska, the main city street which used to be the center of active life before the war, darkness reigns after about five in the evening.

In some places, the shops` signs are still illuminated, which somewhat helps with navigation.

Many people who ramble the streets at night – walking their dogs or on their way home from the subway – use their mobile phones to light their way. Some highlight the whole route, while others turn on the flashlight only at pedestrian crossings, as the traffic lights usually don’t work during outages.

At such moments, you start to consider purchasing reflective clothes. For pedestrians, this accessory will definitely not be excessive.

The Russian attacks cause transport collapse when the subway and other electric transport stop operating. Then the buses come to the rescue, as they can run on trolleybus routes.

So all the passengers returning from work transfer to minibuses, buses, and taxis.