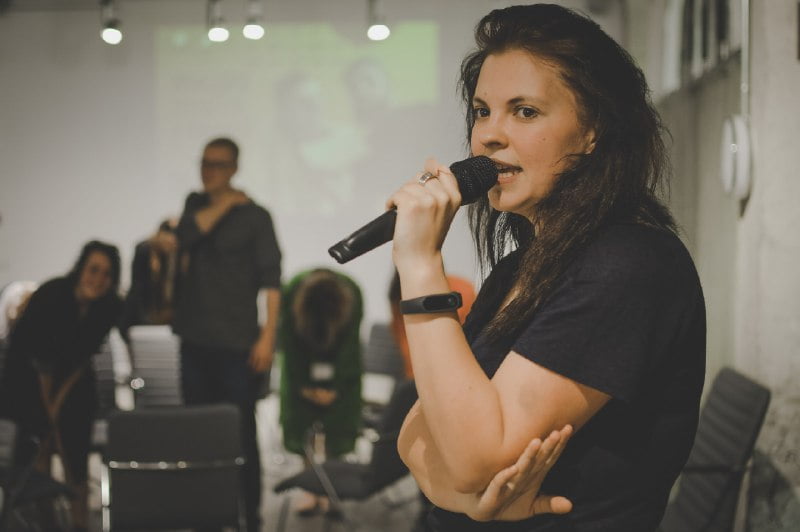 How to work efficiently: facilitator Olesia Arkhipova has described particularities of team building

How can one organize a team whose members don’t really understand what they do? Why are conflicts ought to be? How to make the working process easier? All these questions were answered by facilitator Olesia Arkhipova, CEO of Sector F company that helps teams work more efficiently.

Olesia has graduated in economy and psychology, studied Management of nonprofit organizations for a master’s degree in Ukrainian Catholic University and negotiations in the Netherlandish institute, participated in British Council’s program and many other facilitation programs. So far Olesia has run 300 events – that includes 8000 hours and 4000 people. Among them almost 50 events were strat-sessions. She got to work with various teams: from factories and IT companies to translation and production studios. 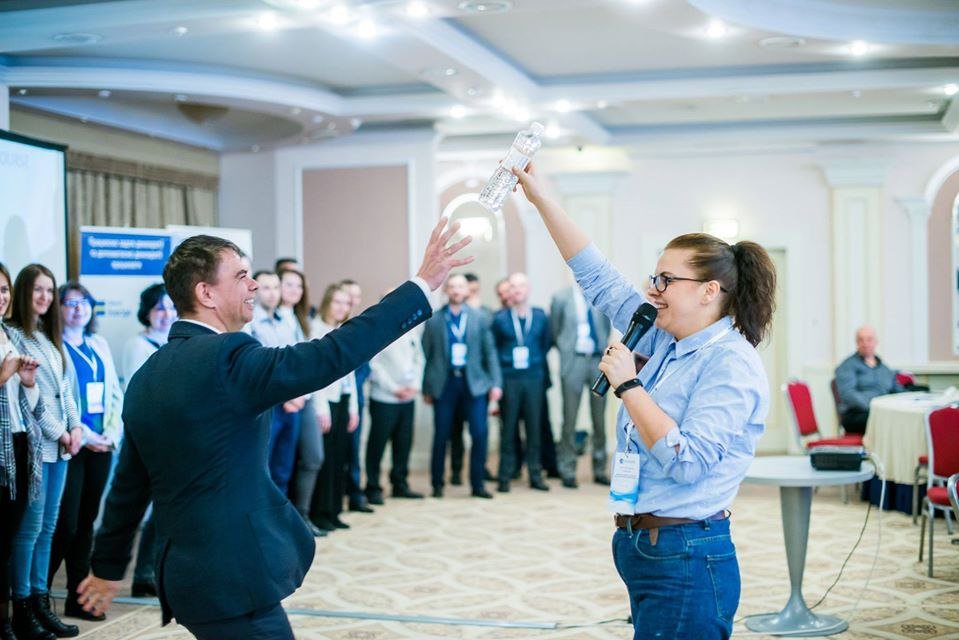 The facilitator is a word with many more or less similar definitions: the facilitator helps a team/business/group of people professionally reach an aim they’ve set. What is your definition? What is this job about for you?

I like it when my clients say: “A facilitator ‘lightens’ thinking of entrepreneurs and their teams”. I mean it’s understanding what matters. We need it both before and after making decisions. And to decide we must analyze a lot of different thoughts and processes. As to me, facilitation is about helping others to take an honest look at their business, team, and aims. It’s about understanding how to actualize it.

When you start working with a group, what do you pay attention to in the first place? What are your first steps?

If I work with a business group, first of all, I consider its owner’s inquiry. As a rule, I work with small and medium-sized enterprises, where owners are managers. I contemplate the reason for their inquiry. As when people don’t quite understand what they want, there goes disagreement in a set inquiry and a result.

Then I interview each team member, get to know them, and see a dissent of their thoughts on the structure or aim of the business they’re working for. Before starting to work with a team, I often ask the manager to tell me their roles. After that, I ask the teammates about their own roles in the company. When starting it’s very important to notice a disagreement in what one thinks one’s doing and how others perceive their work. These disagreement issues are just what I work with.

When I ask a team if they have any conflicts and I’m told there are none, it means that people haven’t built their credit up. Or there is a huge conflict or plenty of small ones. And my job is to work these conflicts out. 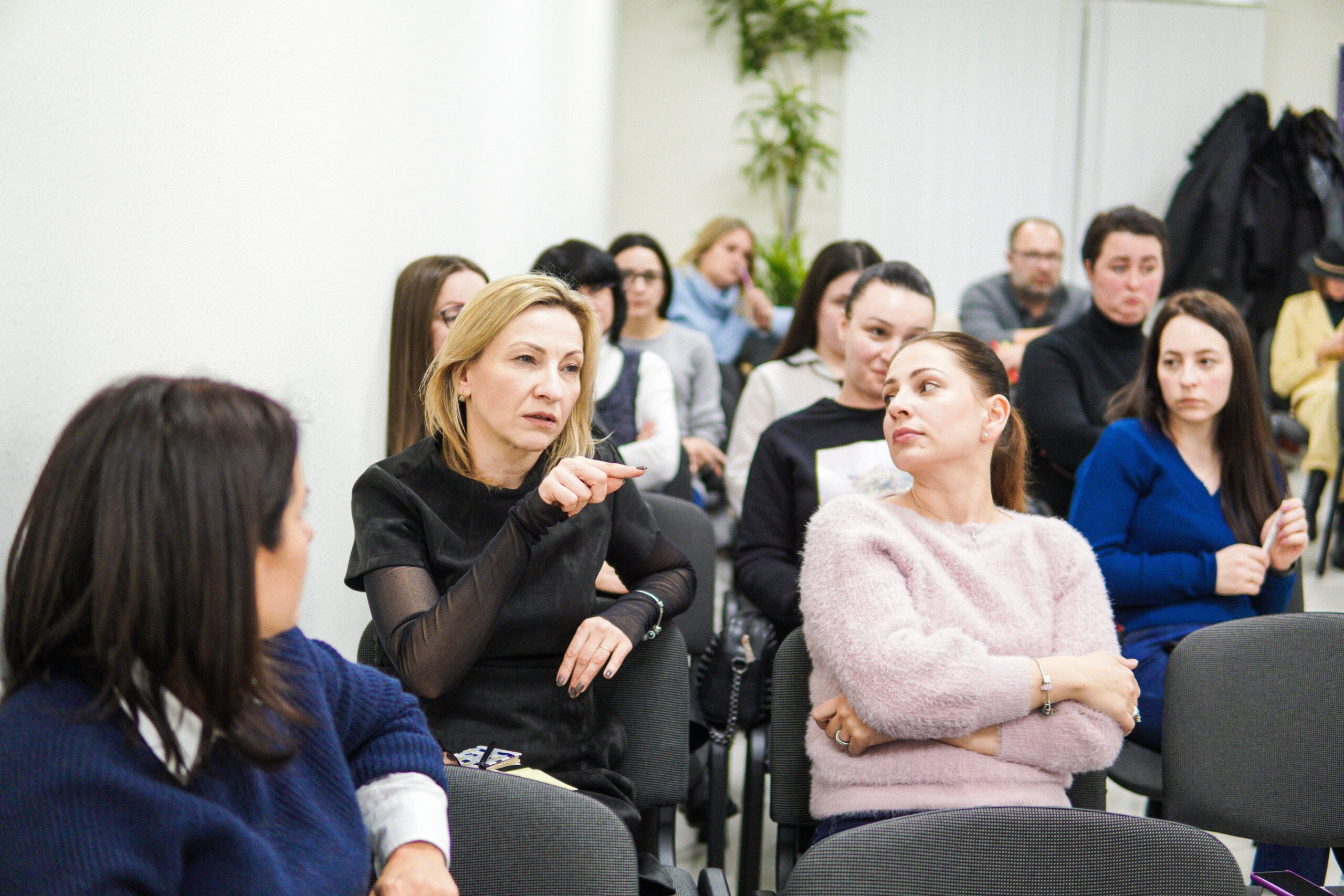 Then goes the facilitation process. For example, a business owner’s inquiry is to make a goal for the year 2021.In order to make any goal I contemplate if a team has any certain vision. If there is one, I needn’t facilitate, – I just come up to the team and see the vision being accepted.

If a business owner doesn’t have any vision or a goal but wants a team to generate a product, then we make the process different. Working with one organization we can start with checking how a product looks now. Dealing with another one we just work with a product and pay attention to how the product is perceived or where it has to end up and what the situation on the market is. It’s hard to say that the process is the same for everyone. Everything shifts depending on each situation.

Facilitation is a somewhat spontaneous process: only when you enter a group, you can understand where to lead them. For example, I worked with a team and we had to form roles for the working process. We can’t just come and start forming those roles right away. We begin with figuring why there are disagree on the roles. I ask the team to describe the process of creating the product – from a concept to a client’s getting it ready. Then we notice that, as it turns out, creating a product looks quite individual. So I ask the team: “And what do you want it to be?”. Facilitation is about easing, as that’s how it translates (lat. facilis ‘easy, convenient’). Often people speak different languages talking about the same things, and my task is to translate them from accountant-tongue into the language of production, or from creator-tongue into IT-tongue.

I work with dissension issues.

Are there any peculiarities in work with creative businesses?

When there are many creative products, we analyze them. Which of them provide success and which provide stability? How exactly is business connected with public organization and creativity?

After analyzing the products we try to figure out what directions of business work are there and where they cross. We contemplate what processes are to be done in order to realize something in these directions (for example, goals for the next year if they have already been set).

And the most important issue is understanding. I’ve noticed that often a business structure in creative industries includes everyone enthusiastically creating a product and not thinking of a business idea much. And it’s fine, but eventually, they must find out what processes are done in the company and figure where to go with it.

What’s different in working with a public organization and a business?

Generally, all the business processes should function in a well-adjusted public organization (PO). One thing that distinguishes PO and business is that business generates money and PO generates influence. However, POs that subsist on grants have another system of motivation and financing. They can have no money and then get a grant and see what opportunities for the next six months of work are there. But, although grant sustenance gives more freedom at the beginning of the planning process, you have less flexibility as you’ll have to bring the project to termination all the same. While if anything gets screwed up in business, work is reset and done in another way. Business is a structure that is constantly tested whether it can work efficiently. And if the actions of a public organization are ineffective, its team keeps sticking to them within the framework of the project.

Many small publishing houses may have freelance workers. How do you work with that sort of team so that everyone is on the same wavelength?

If there are freelance workers they have to become a part of the team. But if we deal with freelancers as with an outsource, then we organize an administrative staff so that they work on the same wavelength and after that, the administrative staff establishes communication with freelancers. In this case, freelancers don’t become team members. But if freelancers are to belong to the team, then they can’t stay in their current positions. They must feel appurtenance to the team at least within the project. For example, the team is to complete a project – to release a book within four months. When a freelancer chooses a certain role in this project, he/she attains a certain identity. On the whole, every team member must have several identities formed. The first one is something ‘I’ do: a person has to know how to call his/her work. When I enter an enterprise and ask “Who are you?”, and a team member answers “I’m working on a site here”, it means that he doesn’t know who he is. 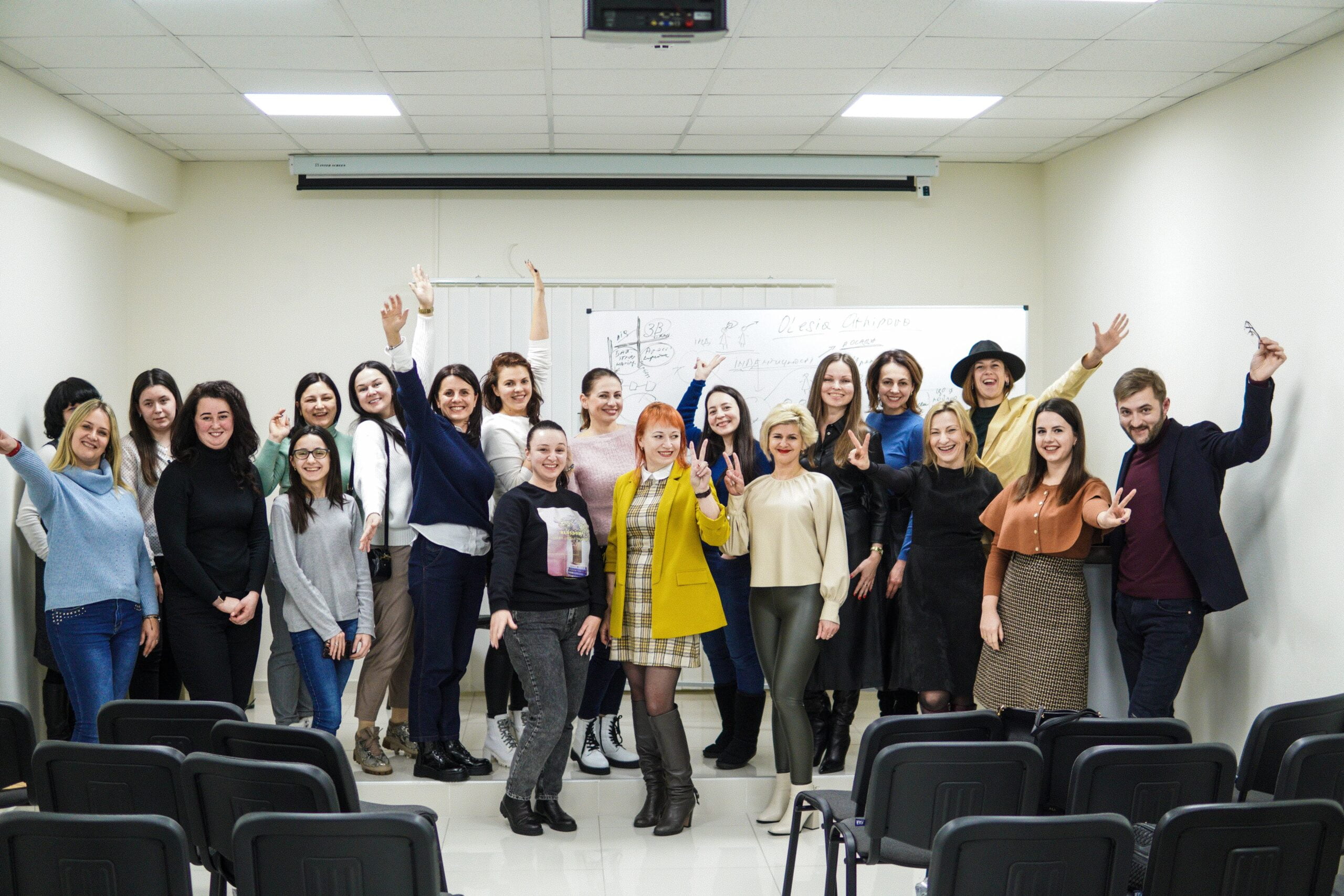 Conditionally one must say “I’m a marketologist” or “I’m an editor” or “I’m a content-maker”, that is ‘I’ is the one expected to do some work, ‘I’ realizes and feels being such a person.

The second necessary identity is an identity of, so to say, a banner. For instance, members of an organization ‘БУР’ (BUR, Building Up Ukraine Together) call themselves BUR-guys. Saying “I’m a volunteer at BUR” is not the same as such wording seems to separate you. It means that you can volunteer in BUR today and somewhere else tomorrow. So working with freelancers I’d like them to realize one thing clearly. That ‘I’ is not the one working in a team and that other members work as well.

“People often speak different languages, and my job is to translate.”

When some creative community declares its members to be ‘equally equal’, isn’t it hard to work with such a group? It’s like a film with no director, orchestra with no conductor.

Such a working strategy really makes no sense. I agree that equality is possible, however the absence of coordination isn’t. Or perhaps those people are very subjective, knowledgeable, responsible, and able to assign their duties and do them.

When some working process fails and nobody catches it up, we deal with a horizontal team. And if you’re responsible for something and we’re a horizontal team, I feel no responsibility for your process. It does not only work with no control but also a moment when we admit that one of us fails. When we admit that we as a team get a negative result. And only after that in our meeting we can talk about how it happened, why it happened and what we want it to be in the future. So we’ll change team rules so that they subserve success.

Coordination doesn’t necessarily mean a vertical team. It’s just a question of whether there is or is not a coordinator’s role in a team. And this role can equal common voting. But either way, there must be a coordinator or a person who keeps eye on processes.

“Making strategy is a chance to take a look at the future yourself.”

How does a facilitator come up with a strategy for a team’s winning success? What is the purpose of a strat-session? 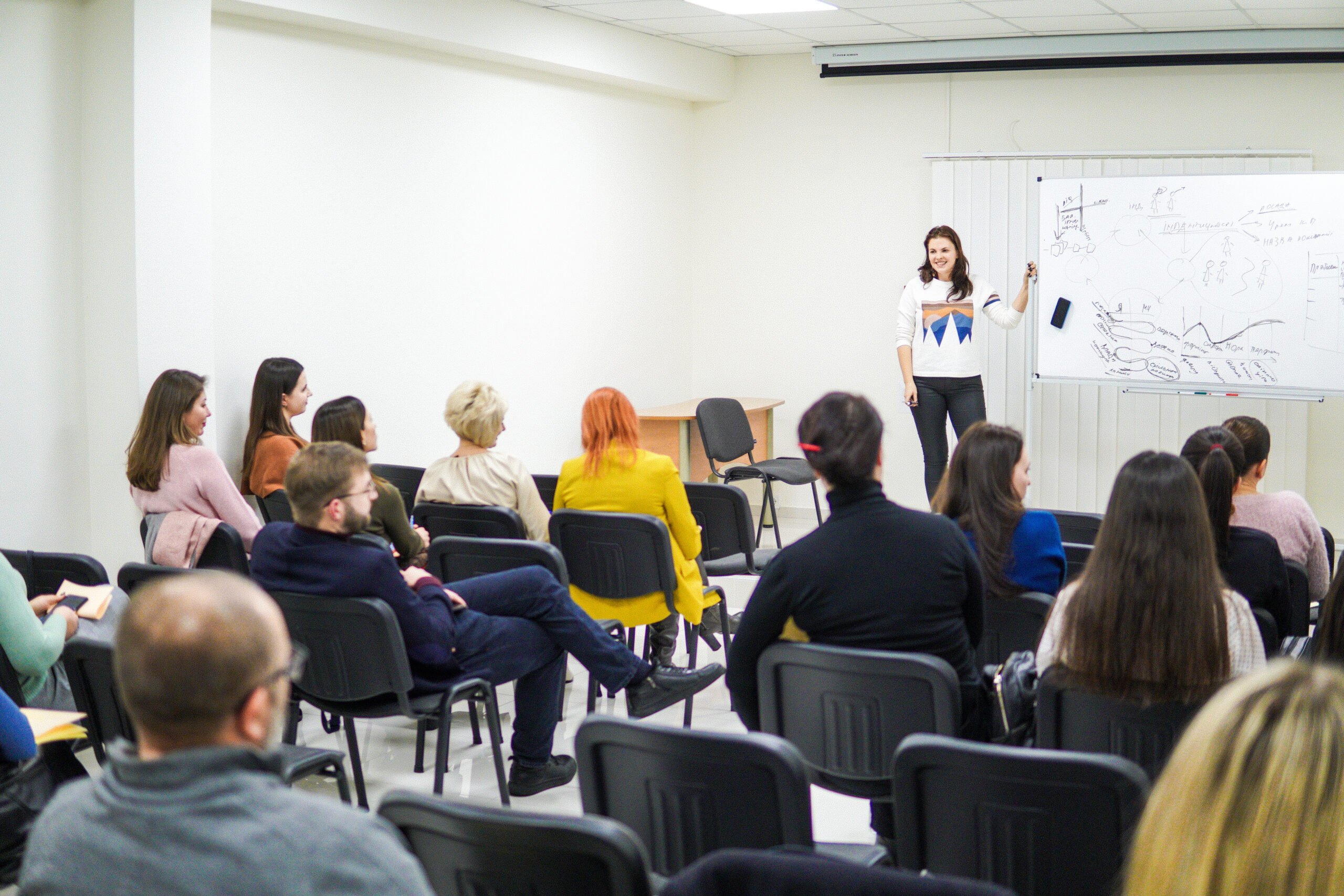 Making a strategy is a chance to take a look at the future yourself and understand a way to be gone in the future. As for me, making a strategy is knowing how to define subjects and objects and to see their influence. It’s not just a question of looking over the market’s quality but also about a place where we can see which subjects we can control. For instance, dealing with business, we understand that there are places we can impact (our team) and some we can’t (market). People who aim to influence the market can create departments within their company so that these departments make rivals’ products in order to strengthen each other and manage the market. That is making strategy. Some people, e. g. Steve Jobs, even formed a totally new market.

Marketing stuff – what market capacity is, how flexible the market is, – isn’t my thing. My scope is to see everything we discussed doing.

Strat-session is a place where people make decisions and assume responsibilities in business. We gather for reconsideration and in the end, we can say that we determine goals, understand the roles, and have communication built up.

How do you evaluate your work’s success?

Feeling understanding, in the end, is very important. My job is done well if every team member leaves strat-session thinking “Now I understand what we do and why what my part in it is and why I need our work”. If I see that all puzzle pieces are put together and the image is clearer for the team, then I feel that I’ve worked effectively.