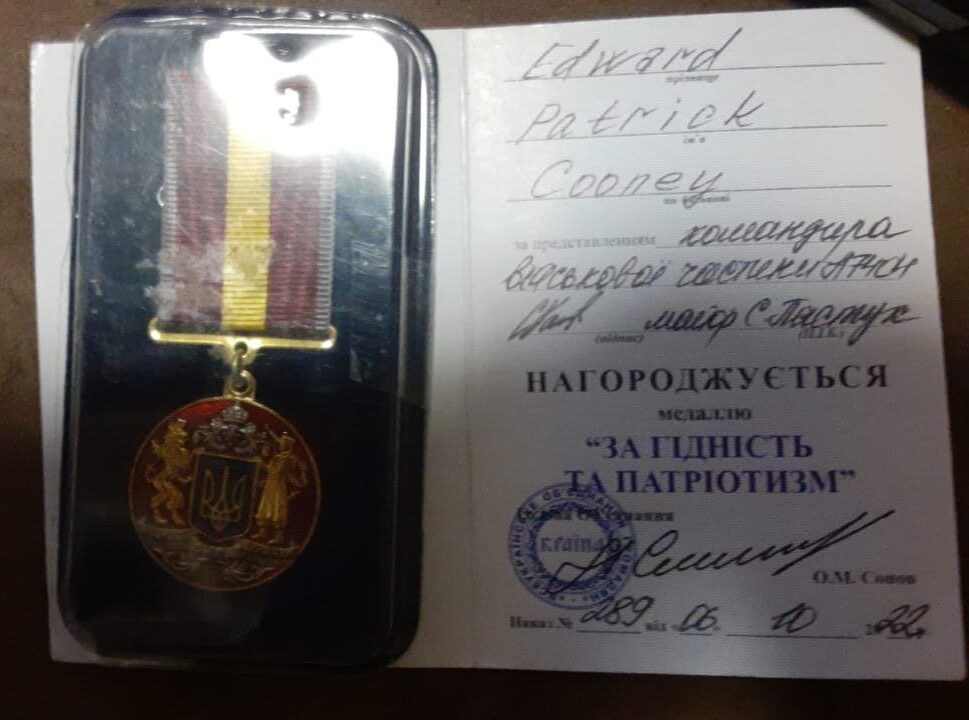 Foreigners in Kharkiv. Edward Cooney from Canada: “We need to show that we care”

The award Cooney received in Ukraine

The Russian military attacks Ukrainians right in their homes, hitting the residential buildings and critical infrastructure. Meanwhile, there are foreign countries where citizens can go on with their lives, staying safe and warm. And nevertheless, some people leave the comfort of their houses to come to Ukraine.

Here is the first of the stories of three volunteers who came to Kharkiv, the city severely affected by the Russian attacks, to work at the “Hell’s Kitchen” – an organization cooking meals and baking bread for the military and medical staff in Kharkiv Oblast.

“I’m a humble guy, not a rich one, you know,” says Edward Cooney, 56, a construction worker from Canada. The man had to sell his car and all his tools and spent all his savings to cross half of the world to get to Ukraine.

“I believe it’s important to show the Ukrainians that we care. That here in Canada some ordinary guy cares about them, and I hope that can inspire the people. So I’m just doing my part to help.”

For the first time, Edward arrived in Kharkiv in April and stayed there till June. He chose Kharkiv, “because no one was going there”. Everybody was telling Edward to avoid Kharkiv as it was too dangerous and too hard, too much trouble. “But I came to Ukraine to help, so I decided to be the one to help the people in Kharkiv. I hopped on the train, it was April 24 or 25.”

At Kharkiv train station Cooney was picked up by one of the organizers of Hell’s Kitchen, who was astounded that Edward showed up at that time, at that place, having no military experience.

“I didn’t have any grand dreams of going as a fighter, all I did was to wash the dishes and to clean floors, and clean toilets, and whatever I could do to help.”

The train came eight hours later than scheduled, so Edward finally arrived in Kharkiv at 6 a.m. When he and the volunteer were passing the deserted Kharkiv streets, they could see only military men.

In Hell`s Kitchen Edward met Yehor and Liuda Horoshko, the founders of the volunteer organization. Cooney`s voice changes when he talks about the people who have become his friends. “Dude, I get emotional about these two, for what they’ve done for this organization. They are actual leaders, and they support each other.”

Edward talks about his kitchen colleagues with warmth, calling the cooks “chefs”: “I know their names, but I call them chefs to give them my respect.” He confesses even thinking and speaking about Hell’s Kitchen people makes him feel touched.

“That’s why I’m there. I’m not even Ukrainian, but I believe in these people so much that I don`t care what others think about me. I would come to Canada, and ask everybody for help, would ask to support us.”

Edward confesses as a single dad working in construction he did not have much to offer. So he started volunteering and fundraising in Canada. “I was literally knocking on the doors of the churches and organizations here in Montreal, trying to draw attention to Kharkiv and the Hell’s Kitchen, to the help they needed”.

One of the special Kharkiv memories Edward shares is May 14, “a great day, when we pushed the enemy back. It was great to be a part of it. I didn’t fight in any way, I was just making the meals, getting the guys their meals, cleaning the floors again, cleaning up the area, doing whatever I could to help the army.”

Cooney was awarded a medal for the Distinction of Patriotism to the Ukrainian People. “I took it humbly,” says Edward, and his voice trembles. He didn’t expect the medal, and this award means a lot to him. Cooney says he believes so many people deserve this award more than he does. “You don’t go to a war expecting to get a medal for just cleaning the floor and helping people to get food in a couple of villages,” he says.

Edward keeps naming the volunteers who became his friends and inspiration. He asks to make a special mention of Hell`s Kitchen, as this organization “works hard, humbly, behind the scenes. They struggle every day to make meals to give on the streets of Kharkiv for your people to eat. I can’t say enough about these people, my love goes to them every day. If the whole world was like these people we would be doing pretty well!”

Cooney says he has learned to love the city of Kharkiv immediately. Walking the streets he admired the architecture and the kindness of the people he met. One day he saw a group of boys skateboarding in the city center and talked to them. Edward and the kids were equally excited about this conversation – he was impressed with the warm attitude of the locals, and the boys were fascinated to meet a real Canadian in their city.

Edward thinks Ukrainians may seem severe, but he feels the general pleasantness of the locals. “Once a person gets to know you, you are actually soft and nice.” People spoke to him in the street, and any time the foreigner needed help they tried to support him, even knowing little English.

Edward admits being “blown away” by the beauty of the city, and the kindness of the citizens who just want their lives to go on despite the war. He especially admires the statues on the tops of the buildings. “I took dozens and dozens of pictures, walked the riverfront, walked by the giant flag in Kharkiv at least fifty times, I prayed in all the churches and lit the candles in most of the churches, I’ve donated to the poor, I ate in all the little cafes, I did everything tourist is supposed to do – but in a warzone budget so to speak.”

What impresses Edward, even more, is the citizen’s ability to come together and become an extreme force.

“They [the Hell`s Kitchen volunteers – ed.] came together so quickly, and people are getting fed so fast, and we are talking about 10 to 12 thousand people a week getting fed with a good meal and bread. And that’s including soldiers, every week we are pounding out the food. They are capable of overcoming everything. This is mind-blowing. It will be remembered for generations.”

Edward confesses he keeps being amazed by everything he sees in Ukraine every day, and feels honored and excited to be a part of it.

“In less than a year you’ve pushed the army back to the borders. You have shown the world what democracy is all about. That’s what you have done,” says Edward.

“I wouldn’t say that people have become tired or uninterested. On my way home, at least a dozen people came to say thank you and ask me questions seeing my military jacket and chevrons. I was really impressed, one of the men who came to me was from Finland, another from South Africa, and the Air Canada crew was also fascinated – they all seemed very interested.

What I want to note is that it’s not Ukraine against Russia, it’s Ukrainian and Russian people against the Russian army. I’m telling you, it was mentioned like father and son fighting each other – but half of the city of Kharkiv speaks Russian, and they are all against the Russian army. Which I didn’t know. And if these people are fighting for what they believe is right, I should be the last one to judge. I’m here to help.“

Edward went to Canada to earn some money, fundraise for more help, and plans to be back in Kharkiv. He says the only thing he regrets is seeing his grandchildren too seldom, just three times since April. They live in Calgary, and Edward now can’t even afford to go to see them. But Cooney shares his plans to return to Canada in June “to spend the rest of my life with my grandchildren”.

And meanwhile, he`s returning to Hell`s Kitchen in Kharkiv – to the people who have become his second family.